Apparently the Lutheran Church in the US has just voted to accept gay clergy if they are in a long-term committed relationship. Consertive Lutherans and some other denominations are shaking their heads. ‘They are throwing overboard biblical teaching and traditional Christian values in the name of political correctness’ one senior clergyman said. Of course, he and those who agree with him are absolutely correct. There is no doubt about what the Bible says on homosexuality and how the Christian tradition has always seen it. He’s also quite right about the ‘throwing overboard.’ But what I find difficult to understand is 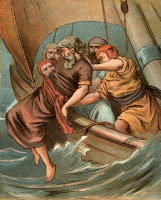 why this particular example of ignoring biblical teaching and Christian tradition is causing so much controversy, and all the other examples of doing the same thing are not. You see, recently I have been doing a bit of research on usury, charging interest on money borrowed. It’s a rather interesting subject actually. To my surprise, I discovered that usury is frequently condemned in the Bible (Exodus 22,25; Leviticus 25,35-7; Deuteronomy 23,20-21, etc). Even Jesus beautiful saying ‘Love your enemies, do good, lend to them without expecting to get anything back, and your reward will be great’ (Luke 6,35) was used for centuries as an argument against usury. Numerous Church councils condemned it, you could be excommunicated for it and it was a capital offence in different places at different times. According to Bill Bryson’s tremendously entertaining and readable book Shakespeare, the Bard’s father got into serious trouble for just giving credit, which was considered a type of usury under both church and civil law. Then, over a century or two after the 16th century it was…well…thrown overboard. So I wonder why when conservative Christians campaign against gay rights and abortion they are not also picketing loan companies, banks and building societies. How come they are not raging against hire-purchase? Why one and not the others? As far as I can see, there is not one of the Buddha’s pronouncements on matters of ethics or morality that would not be as acceptable today as when he spoke them. They really are timeless (akaliko). If you would like to know the Buddhist attitude on usury go to http://www.buddhismatoz.com/ and look up ‘Interest’.
Posted by Shravasti Dhammika at 1:07 AM

In your article on interest you say that money lending was not condemned by the Buddha. But in an article at
http://www.accesstoinsight.org/lib/authors/bodhi/waytoend.html#ch4 Bhikkhu Bodhi says that the Buddha considered it a wrong livelihood. Please comment.

reasonable said...
This comment has been removed by a blog administrator.
September 6, 2009 at 2:09 AM

Pl allow me to clarify two points related to what u said to reduce the potential of causing misunderstanding about Christianity on the issue of homosexuality.

The first point relates to what u said in "Conservative Lutherans and some other Christian denominations are shaking their heads. ‘They are throwing overboard biblical teaching and traditional Christian values in the name of political correctness’ one senior clergyman said. Of course, he and those who agree with him are absolutely correct."

I think it is not accurate to say that they are doing that "in the name of political correctness". Some bibical scholars, clergy-persons and some churches are moving towards the acceptance of homosexuality not because of political correctness but because of their conviction on what represents God's mind on the matter. Some traditional Christian denominations (e.g. the Methodist and the Anglican) and some biblical scholars, in searching for truth for issues, rely on a dynamic interaction between scripture, tradition, reason and experience. Some scholars have shown biblical grounds and biblical examples where experience overrides scriptural text. It is upon a religious conviction and not due to political correctness that some of these Christians came to accept homosexuality (i.e. they believed that this acceptance of homosexuality represents the mind of God on the matter).

The second point I need to clarify relates to the statements "There is no doubt about what the Bible says on homosexuality and how the Christian tradition has always seen it. He’s also quite right about the ‘throwing overboard.’ "

Actually there has been much controversy on interpretation of the bible on this issue (because it is not really that clear!) and in the end, the mainstream churches generally agree that some of the 7 passages were traditionally misread, and there is only clear passage referring to homosexuality. But once biblical scholars bring in the interaction of scripture, tradition, reason and experience (e.g. spiritual experiences, scientific experience), some began to see ground for churches to disagree with that one single clear passage (this "experience overriding text" itself has a biblical basis - so it is not always text having the last word). Some also see the ground for not accepting all biblcal text blindly due to the basic Christian principle that ultimate authority does not lie in the bible (or else it becomes bibliolatry) but lies in what Christians believe as the living God, plus the belief that this god has been using imperfect people to accomplish his purpose and hence it is quite natural for this god to allow for the formation of an imperfect scripture because he is able to use imperfect scripture for his purpose too.

I hope my post to clarify the above two points can be allowed to be posted here. My main message is that some churches are accepting homosexuality not because of political correctness, but because when they re-examine the issue closely, they began to see religious ground for a change of view. I hope my brief explanation above also help Buddhists to understand a bit of the reasons why some churches can seemingly depart from "clear" scriptural teachings on various issues. My purpose here is not to promote Christianity but to reduce potential misunderstanding.

I missed out an important word "ONE" in my 5th paragraph in previous comment:

"Actually there has been much controversy on interpretation of the bible on this issue (because it is not really that clear!) and in the end, the mainstream churches generally agree that some of the 7 passages were traditionally misread, and there is only ONE clear passage referring to homosexuality..."

Dear Reasonable,
Funny that it took them 2000 years to discover what those passages ‘really’ mean. On another matter, from now on I will be deleting most of your, No’s and Aah haa’s comments because there are too many, they are too long and not infrequently amble too much from the subject in hand. But thanks your contributions and an occasional comment, pertinent and relevant to the issue, will still be welcome.

Thanks Bhante, and noted your preference for comments related to the subjects in your posts. :)

Dear Venerable,
My apologies for the indiscretion of making too many posts. However, it was only because of my interest in the subject of your blog. Many of my posts are also in response to concerns raised by your readers and which nobody else responded to them. For those I believed I had some useful insights, I had offered them hoping they could be helpful. And usually I waited for a day before responding so that any other readers who wanted to respond may do so first. In any case, I respect your decision since this is your blog. Thank you for all the insights and knowledge you have imparted.