A Toast! To The Fifth Precept!

The Ministry of Public Health is joining forces with public and private organizations in launching a campaign against alcohol abuse, marking “No Alcohol Day,” which coincides with the start of the three-month Buddhist Rains Retreat (vassa). Known in Thai as Khao Phansa, the Rains Retreat this year fell on July 8. A group of young people, including performing artists, met Prime Minister Abhisit Vejjajiva before a Cabinet meeting on June 30th to show their appreciation for his efforts to raise public awareness of alcohol abuse. The group also urged Cabinet members 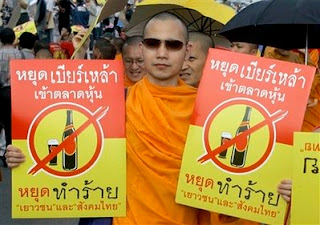 and the general public to refrain from drinking alcohol during the three-month Buddhist Lent.
Deputy Public Health Minister told a press conference that the Ministry was determined to implement various measures to minimize the impacts of alcohol consumption. He did not say whether Bangkok’s annual Beer Festival held every October will be affected. On 8 July 2008, the Cabinet decided to designate Rains Retreat each year “No Alcohol Day.” Refraining from drinking alcohol is considered a worthy act, not only for keeping people in good health, but also in compliance with Buddhist principles, which include a call for abstaining from intoxicating drinks.
Statistics show that 60 percent of road accidents in Thailand are caused by drunk driving and that alcohol consumption led to an indirect economic loss of 156 billion baht during the past two years. Medical costs alone were as high as 5.5 billion baht. The country has the 45th highest alcohol consumption rate in the world, far above that of any other Buddhist country. In 2007, the sales volume of alcoholic drinks in Thailand amounted to 2,300 million litres, and it dropped to 2,000 million litres in 2008.
As for legal measures, the Ministry of Public Health was successful in pushing for the passage of Thailand’s Alcohol Control Act, which came into force on February 14th, 2008. Apart from banning liquor advertising, the act also seeks to restrict the sale of alcohol in or near temples, public parks, government offices, and schools. Other related laws will be enforced to impose stricter controls on alcohol sales. According to the Department of Disease Control, a survey conducted in 2007 on alcohol consumption indicated that out of 51.2 million Thais aged 15 and over, 14.9 million, or 29.3 percent, were alcohol drinkers. Among this group, 34.4 percent were in the working age group, followed by 21.9 percent for the group, comprising young people aged between 15 and 24, most of whom are students.
From the internet.
Posted by Shravasti Dhammika at 1:04 AM

Yesterday, September 1, was the first day of the school year here in Ulaan Baatar, Mongolia, and also an Alcohol Free Day. Stores were not allowed to sell any alcohol, including beer, and had to cover up what they had in stock. There are rumors there is going to be one Alcohol Free Day a month from now on.

Dear Don,
Thanks for news from a part of the Buddhist world we hear so little about. Hope you will keep in touch

One day per month... 353 days to get drunk per year :) Not much use, much depends on the individual to exercise restraint. For those who aspire to reach the higher states of meditative concentration, I understand complete abstention is necessary.

About the HEADING! :) Just a few days ago I was in Germany visiting my younger daughter and it was an Uposatha day so I duly raised the glass to Uposatha :). Attending various parties I usually fill my glass with a few drops of some wine not to explain every time that I follow the fifth buddhist precept. And sip it drop by drop with every toast :).

I think there is a problem concerning alcohol beside its abuse. Every time I am on a party and do not want to drink alcohol I have to justify myself. I have to argue as a 'No' or 'I just don't want to drink' is rarely accepted, only reasons like that you have to drive or your are on medication are the only ones which are not suspicious. It is not that people want you to get drunk, but not having a beer is socially not really accepted and I wonder why.

Concerning the negative impact of alcohol: There was a time when people though a society without alcohol would be a better one. It was 1919 in the USA when the prohibition was enacted and it got even worse. According to the German-Wikipedia:

Not to forget the rise of the organized crime, Al Capone became a legend. These structures even remained after the prohibition ended.

As much as I don't like how alcohol is handled nowadays as much I think that a small group can not and should enforce a change, at least a religious group. Politics and religion have to be separated. You just can't switch of the need for alcohol.

No Alcohol Day, No Smoking Day, No Gambling Day, No Prostitute Day, No Bribing Day .... if we are to set aside one day of the year for every vice, 365 days wouldn't be sufficient.

Yes I think that it is dangerous for a religious group to push.

Hopefully the Buddhists do not become like Christians, attempting to impose their values onto others in the wider society.

We can promote values such as responsibility etc, and let people have the freedom to buy/sell/consume alcohol within the limits of not causing harm to others (i.e. moderation, responsibility etc). We can impose heavier penalty/punishment (e.g. jail term) on drink driving, but we should not take away the freedom of people to drink alcohol, whatever religious season it is.

The teacher in our sangha defines the fifth precept as "Do not intake intoxicants to the point of heedlessness." and says we need to look at the intention. Does this viewpoint have validity?

Dear Dyanne,
Ah! That’s the old ‘middle way’ approach to alcohol. ‘If you get drunk that’s one extreme, if you don’t drink at all that’s another. I am careful to avoid the extremes and have a few Johnnie Walkers after work and a nice bottle of burgundy with dinner’. I do agree that intention is important, so one has to ask, ‘What is my intention in ignoring or rationalizing the fifth Precept when it very clearly says that one should not take alcohol?’ Oh and incidentally, pamadadatthana does not mean ‘to the point of heedlessness’. It means ‘causing heedlessness’.