The terrible Haiti earthquake has been in the news for the last few days which has stimulated me to have a look at what the Buddha says about these terrifying and destructive occurrences. Earthquakes (bhumicala) occur all over India but particularly in the north and the ancient Indians made various attempts to explain their cause. The 10th century Adbhuta 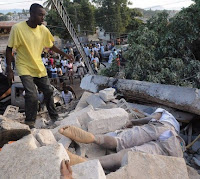 Sagara says earthquakes are caused by the movement of sea monsters while the Brihat Samhita, written in about the 6th century, says they are caused by flying mountains dropping to earth. Another theory was that they happen when the great elephants that holds up the earth sigh. The oldest explanation, in the Rig Veda, says that Indra, the god of thunder, agitates the four elements – earth, water, fire and air – and that this makes the earth quake. The ancient Greeks believed that earthquakes occurred when Poseidon got angry and threw his trident on the ground. The Bible attributes plagues, droughts and other natural disasters to God’s vengeance for mankind’s sins. The well-known TV evangelist Pat Robertson has just said that the Haiti disaster is God’s punishment for the Haitian people doing a pact with the Devil.
The Buddha said that earthquakes occur when eight things happen. “This great earth is supported by water which is supported by air which is in turn supported by space. When a great wind blows, this stirs up the water and because of the stirring-up of the water the earth quakes” (D.II,107). Although the Buddha was mistaken in this matter, he was clearly attempting to give a naturalistic explanation for the phenomena. However, he also said that gods or even humans who had developed certain psychic powers could cause earthquakes. And finally, he said that earthquakes can occur when a bodhisattva is conceived, is born, attains enlightenment thus becoming a Buddha, teaches the Dhamma for the first time, decides to die and then passes into final Nirvana; although he did not explain why they coincide with these events. Probably, like many people at the time, he assumed that ‘earth shattering’ events should have an earth-shattering manifestation. Interestingly, the Bible says that an earthquake occurred just as Jesus died (Matthew 27, 51).
If you would like to read my understanding of natural disasters and kama from a Buddhist perspective please go to
http://sdhammika.blogspot.com/2008/05/kamma-and-natural-disasters-i.html
then read this commentary on different religious reactions to the earthquake from the New York Times
http://www.nytimes.com/2010/01/14/opinion/14bhatia.html?emc=eta1
Posted by Shravasti Dhammika at 12:23 AM

Maybe slightly beside the point, but I've always thought that Buddhism did go to Africa, and remained there an oral tradition, figures like Kombele Kembe might signfy the Fully Enligftened One,... That is why we have the word Voodoo like in Theravoodoo, Vaipulyavoodoo, Shunyatavoodoo, Mahavoodoo, etc...
Trough the stories of missionaries the resemblance to buddhism has been known long ago, but it is bound to remain hidden for various political reasons.

The Buddha may not have been mistaken. There is a new theory though not yet universally recognised by scientists that the cause of earthquakes is in Space. They are caused by neutrino winds which are intesified sometimes due to the Sun's activity or even other stars. Such strong neutrino winds do interact with the Earth and cause certain instability, affecting the movement of continental platforms... The observations show that such winds are followed by earthquakes, and the stronger the winds - the stronger the quakes. I do not know if any such wind has been observed before the present disaster.

I always thought it was because God sneezed. At least that's what they taught in my ultra-conservative fundamentalist Christian home school collective.

For those of you looking for ways to help the people of Haiti after the recent earthquake disaster, may I recommend the wonderful work of the Taiwan-based Tzu Chi. They’re always there, efficient and ready with practical help on the ground. I can’t praise their work highly enough.... Also American Airlines will transport any doctor or nurse to Haiti free of charge, call 212-697-9767, please help spread the word!!!