Of Relics And Rascals

Relics are important. They tell you a lot about people. Take Buddhist relic worship for example. It implies a focus on the external and the material rather than on the internal and the spiritual. And of course it is also evidence of a naivety almost completely divorced from reality. No old piece of junk is large enough or weird enough to be accepted as a ‘genuine’ relic. An organization in Tibet holds a relic exhibition every year here in Singapore. It’s a really big thing; advertisements in all the papers, held is a huge conference centre and thousands attending. One of the relics in last year’s exhibition was a dirty-white crystalline-like object about a meter long, as thick as my wrist and labeled ‘Buddha’s Finger Relic’. I asked one of the organizers, ‘How do they know it’s the Buddha’s finger? It could be a section of his femur or perhaps even his penis’. He didn’t laugh. A relic museum has just opened in Thailand which displays over a million relics which, together with all the other ‘genuine’ ones in the world, mean that the Buddha must have had an enormous body. But of course this plethora of relics is easy enough to explain. Any pious Buddhist will assure you that relics have the ability to multiply. Such is the intellectual state of Buddhism in the 21st century – happily frolicking in the 13th century.
And the weirdest thing about traditional Buddhism’s divorce from reality is that it is highly likely that real fragments of the Buddha’s material body actually do exist. The bone fragments found in the Piprahwa stupa in 1898 look like burnt human bone, they have not been touched since they were placed there in perhaps the 5th/4th century BCE and an inscription found with them mentions that they were placed there by the Sakyans, the tribe of people the Buddha belonged to. Of course, none of this has attracted much attention or excitement from traditional Buddhists. They are too busy worshipping any one of the 240 Buddha’s teeth in circulation, 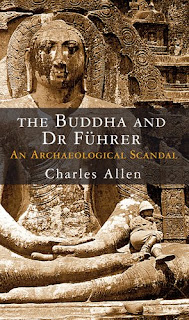 the ‘flesh’ relics that look like brightly-colored glass balls as big as a gobstopper and the white, meter long, thick as your wrist, Buddha’s finger relic that can multiply.
Charles Allen’s new book, The Buddha and Dr. Fuhrer, is the full story about the Piprahwa relics and the events surrounding their discovery. Allen has spent the last 30 years chronicling the history of the British in India but as I discovered when I met his in 2003, he has more than a passing interest in the Buddha’s Dhamma. He has written probably the best book on Mt. Kailash (A Mountain in Tibet, 1982), on the enduring appeal of Tibetan culture and religion (The Search of for Shangri-La, 1999) and the beginnings of Buddhist archeology in India (The Buddha and the Sahibs, 2002). His new book is in a sense a continuation of this last one. It tells of the search for Kapilavatthu, the discovery of the Asokan pillar marking the Buddha’s birth place, and the discovery of what are very likely to be the only genuine relics of the Buddha. It’s a complicated story, including as it does, high adventure, idealism, professional jealousy, nationalism and even fraud, but Allen unravels its many tangled strands and makes it clear. He also tells, I think for the first time, the full story of the notorious Dr. Fuhrer who committed a series of blatant frauds in his desire to win recognition as an eminent archeologist and glory for discovering the lost city of Kapilavatthu. It’s a great story and I sat up all night until I’d finished reading it.
If you want to know more about the Buddha Relic Museum have a look at
http://www.thailandtriptour.com/thailand-festival/buddha-dharma-relics-museum
And if your planning to visit you’ll be pleased to know that there is ample free parking.
Posted by Shravasti Dhammika at 12:02 AM

I feel a strange mix of amusement and pity when it comes to this kind of practice inherent in religion; something akin to schadenfreude I guess.
It appears devotees usually have all the facts at their disposal and yet seem to miss the point entirely. In this case Buddhists have the Dhamma - a most excellent body of practical teachings for the betterment of life - yet ignore it almost completely in preference to hoodoo nonsense unworthy of edification. Why? Is it due to a lack of education? Is it willful ignorance of reality because of an unshakable human need for the fantastic? Or is just another form of harmless distraction for the masses that makes a few bucks on the side for the few? Is there anything particularly positive to be said of these "relic" sideshows (apart from light entertainment)?

Hi Mushinronsha, I've once queued for about 2 hrs to get into a relic exhibition. At that time, I believed they were real as there was a big hype about it, rather detailed information leaflets, and highly secured container for the Buddha relic/s which I thought contained non-reacting gas, and probably because of naivety as well. And the positive effects of the experience? A sense of connection to the Buddha (however false it may be), something like what I would feel if I were to visit Bodh Gaya.

Dear Mushinronsha, C.H., on the topic of positive value of something, anything, be it relics, images or experiences or feelings connected with them, i'm reminded of a discussion with bhante where we looked at the simile of the raft used to cross to the other shore:

"'This raft, indeed, has been very helpful to me. Carried by it, and laboring with hands and feet, I got safely across to the other shore. Should I not pull it up now to the dry land or let it float in the water, and then go as I please?' By acting thus, monks, would that man do what should be done with a raft." MN 22

To a skilled mind, nothing may be useless. To a skilled mind, anything that comes to attention may be raw material to fuel understanding, morality, effort, concentration; beneficial mental states geared towards the noble life.

In this case C.H. mentions what might be called faith from her experience. Although a strong emotional support, we should recognize how far it brings us and also its limitations. So we can be ready discard it like the raft when we know it becomes a burden/obstruction on the way to freedom.

Dear Celestial Horizon and Soe am i, you both make good points.
It's probably true in other religions, and in a secular life too - a beautiful piece of art may move one to a higher plane (so to speak) and help one's mind into focus.
But indeed Soe am i, if we become attached to such things (as I guess the majority of relic worshipers are) even the most holiest of holies can become an obstacle to progress.
For didn't a famous Zen master say (was it Dogen?) "If you see Buddha on the road, kill him!" for even the Buddha can become a barrier on the path to enlightenment.

this reminds me of how historians say about the relics of the cross used in the crucifixion of jesus, which are so plentiful that they can make up a small forest.

Hello. I don't have a live-in experience of Buddhism to grasp and *know* Buddhist philosophy as an insider and so what I am going to say about relics and such comes from my own background as a Catholic using analogous comparison, since we have a living tradition of venerating relics and such.

In my imagination, the Buddha that is the object of devotion is one day going to reveal himself as a trickster of a sort, tell us that he is really an illusion that is useful for us at this stage to bring us to a more enlightened state and then disappear. To be fair, I also imagine the mythical Jesus, or other divinities that we have created are going to do the same.

And I suspect it is the case for any objects of devotion, such as relics. And the mystery of how these can be vehicles of our own growth lies not inherently in themselves but with our own larger unconscious minds. (I reveal a bit of my own Jungian research background here).

There's a big dependency on a faith in a highly functioning 'Higher' self of a sort, but I do suspect that unconsciously, we use means of devotion to concretely work with deep internal unconscious materials. Perhaps to train ourselves in different ways of seeing; perhaps to reorientate our sense of self-importance and learning to live with a tremendous otherness. The downside or the shadow aspect of this is an idolatry that has grown so entrenched that we cannot pierce the illusion.

What might be useful at this point is to ask how we can use projective devotions usefully without being slaves to the objects of devotion?