How The Ancients Did It

We often think of ourselves as living in a society of great sexual license and experimentation and assume that in this respects we are different from previous generations. A quick look through the Parajika section of the Vinaya will show that actually nothing is new when it comes to sex; that it has all been done before. The Vinaya is familiar with bestiality, various fetishes, incest, auto-sodomy, necrophilia, frotteurism (I had to look this one up in the encyclopedia) and several other types of sexual behavior not yet clinically named. It even mentions a monk who had - how can I put this? - a very close relationship with a wooden doll! (Vin.II,35).
And if that doesn’t convince you that nothings new, read the Kama Sutra’s section on rough sex, group sex, sex toys and penis enlargement. If you intend doing so, avoid Richard Burton’s translation, the most widely available and the most unreliable. Burton misunderstood much of the terminolog 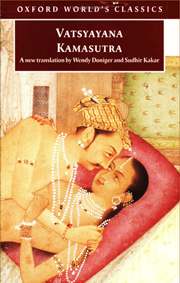 y and left out several sections, not because he thought them too racy for Victorian readers, but because he couldn’t make head nor tail of them. Alain Danielou’s The Complete Kama Sutra is better but he imposes too many of his own prejudices into the text and I still don’t know what ‘buccal coitin’ is supposed to be a translation of. One good thing about Danielou’s book is his inclusion of selections from Yasodhra’s commentary which is not available anywhere else in English. Indra Sinha’s translation is very good and includes selections from the important but less well-known Koka Sastra and Anangra Ranga. Some editions also include reproductions of beautiful miniatures, not it should be noted, those poor quality fakes that were made for English tourists in the early 20th century and which are usually used to illustrate editions of the Kama Sutra. However, by far the best translation of the Kama Sutra is that of Wendy Doniger and Sudhir Kakar, recently published by Oxford World’s Classics.
Although written many centuries after the Buddha (perhaps 4th century CE), the Kama Sutra helps to give some background to the early Buddhist attitude to sensuality; the second of the two extremes which the Middle Way avoids.
Posted by Shravasti Dhammika at 12:05 AM

I practice with a Theravaden
group here in Philadelphia.

May your suffering be extinquished!!

I have to admit... I'm a little disturbed that a Buddhist monk has seen enough of three different translations of the Kama Sutra to know which one is most authentic :)

Dear Robert,
Have you ever read the Kama Sutra? It sounds like you haven’t. If you do, expecting to read unbelievably hot descriptions of passionate sex, you will be, like many people before you, rather disappointed. What you will get is long lists, seemingly meaningless distinctions and in places incomprehensible descriptions of sex all presented in a rather formal and artificial manner. Historically it is of great interest but if you want a hot read get a Playboy magazine. Or better, flick through the Parajaka section of the Vinaya which really is a lurid read.

Haha.. now I'm a little disturbed that a Buddhist monk can recommend Playboy !!