Prostitution is the selling of one’s body for sexual purposes. Today as in ancient India, people considered prostitution to be ‘the lowest type of livelihood’ (antimajivaka, Mil.122). Because it involves sex and the exchange of money, prostitution pertains to the third Precept and also to the Buddha’s teachings of Right Livelihood (samma ajiva). The issue of prostitution has to be looked at taking into account the prostitute and the customer. Roughly speaking, we can say that there are two types of prostitutes: (1) those forced into prostitution by poverty or social deprivation and (2) those who choose to do it because they feel it is a convenient and easy way to make money. This first type of prostitute is called a harlot (vesiya) or a streetwalker (bandhakã) in the Buddhist scrip 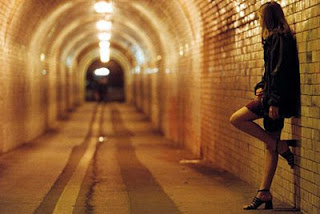 tures while the second type is called a courtesan (ganika or nagarasobhini). The intention of the first is probably just to survive and is therefore kammically far less negative than the second whose motive might be greed, laziness or lack of self-respect. The first is not willingly involved in wrong livelihood while the second clearly is.
Now what of the customer? Customers of the first type of prostitute are definitely breaking both the first and third Precepts because they are sexually exploiting another person, taking advantage of their dire circumstances. The customers of the second type may not be breaking the third Precept, but they are hardly involving themselves in an activity likely to benefit themselves spiritually. Generally speaking, prostitution is a sordid and unedifying affair and sincere Buddhists would not involve themselves in it.
One of the Buddha’s supporters was a woman named Ambapali who was a wealthy courtesan of Vesali and who later gave up her trade to become a nun (D.II,95). In the scriptures we read of prostitutes charging 500 or even a 1000 coins a night for their company (Vin.I,268-9).
Posted by Shravasti Dhammika at 12:24 AM

Is prostitution really the lowest type of livelihood? How about drug dealers? Gun runners? Politicians who plunged countries into wars? People of certain religions who directly or indirectly causes suicide and bashing?

Whether or not it is the lowest of livelihoods is, as you suggest, a debatable point. I am just reporting what people in ancient India and many even today still think. A survey in the US recently found that a majority of people thought that journalists and lawyers were the lowest of all professionals, lower even than politicians, who often rank low in such surveys.

I am a buddhist (albeit not a very good one :-( and I do sometimes consort with prostitutes (in the UK this is legal, as long as certain conditions are respected). Of course, as soon as I find a committed relationship I will immediately stop (but unfortunately committed relationships are so hard to find these days). I make absolutely sure that any prostitute I consort with is of the "ganika" category and not exploited in any way or involuntarily involved in prostitution, and I treat prostitutes with the greatest respect and politeness. I am better at respecting the other precepts (I do not take any intoxicants for example), but the third one is the most difficult. I believe that paying a prostitute is more honest and less spiritually damaging than seducing women into sex through false pretences. I do not want to feel guilty, as guilt is a negative unhelpful feeling. Meditation helps reduce sexual cravings but they are the hardest to get rid of. I have celibate days, and even weeks (with not even masturbation allowed), but I don't think I could ever be totally celibate, and this is of course not required for a buddhist who is not a monk. When it comes to respecting the precepts and improving oneself spiritually I think the important thing is to constantly try to improve, little by little, not aim for immediate perfection. Am I a worse buddhist than one who respects the third precept by being in a faithful relationship but who occasionally drinks alcohol? I hope not.