A Study In Contrast

Events in Korea of late could be seen as a study in contrast. The problem is not that the president, Lee Myung Bak, is a Christian but that he is a particular type of Christian – one of those types whose religious convictions drive them to overstep the borders of good manners and good judgment. When Lee was mayor of Seoul, he declared the city ‘a holy place governed by God’ and the citizens of the city ‘God’s people.’ Later he dedicated the city ‘to the Lord.’ Strangely, there was no subsequent drop in Seoul’s crime rate. In 2006, Lee also sent a video prayer message to a evangelical rally where the worship le 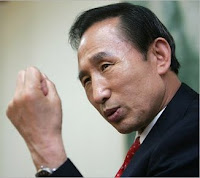 ader called on God to ‘let the Buddhist temples in this country crumble down!’ (Asia Times 1,2,2008) On being elected president Lee publicly announced that he intended to turn the president’s mansion into ‘a house of prayer,’ not a good start one would have thought in a country where more than half the population are not Christians. He filled his cabinet with evangelical Christians like himself, including several from his own church, and has since made a point of being seen at evangelical Christian functions. In early 2008, the Seoul metropolitan area transportation information system (Algoga), administered by the Ministry of Land, Transport and Maritime Affairs, deleted the names of major temples (but not churches) from their map. The ministry apologized, saying that it was an inadvertent mistake, but a similar thing happened again in August when the educational geographical information system, administered by the Education, Science and Technology Ministry made the ‘mistake.’ It should be pointed out that Buddhists are not the only ones who have problems with Lee. Amnesty International has severely criticized him for ordering police to use ‘excessive force’ against protestors who were demonstrating against his policies. He also faces a criminal inquiry into his alleged links to a 2000 share manipulation fraud, not the first time he has been investigated for fraud. 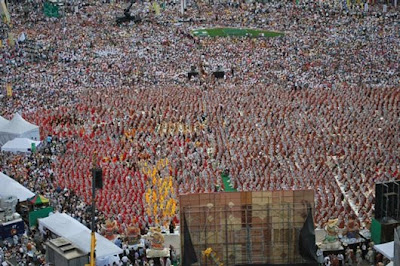 In a democracy the president is elected by the people and is supposed to represent all the people. If he or she has a bias (and we all have some) it is good policy to either keep it well hidden or better, to try to compensate for it. Lee’s faith is so frenzied that he has proudly proclaimed and demonstrated his biases. Up to now there have only been rumbles amongst Buddhists, Confucianists and, one might add, mature socially conscious Christians as well. But in late July when the police rudely searched the car of the head monk of the Jogye Order, Venerable Jigwan, in the course of arresting Buddhist activists that were suspected of having sought refuge in the temple, Buddhists decided things had gone far enough. Some 55,000 people and about 3000 monks have held a demonstration in the centre of Seoul. In contrast to the unapologetic bias and discrimination of the Lee administration, the Buddhists’ protest has been dignified, measured and peaceful. Venerable Wonhak, one of the leaders of the protest said, ‘This gathering is not to declare a state of confrontation but to try to end social conflict and division.’ He also called for more tolerance and understanding between faiths. The venerable’s is attitude is in accordance with the Buddha’s words in Dhammapada 223; 'Overcome anger with love, bad with good, meanness with generosity, and falsehood with truth.'
Unfortunately, blind faith sometimes makes one deaf to such reasoned pleas.

From the 1st of next month I will discuss the positive emotions from the Buddhist perspective.

Posted by Shravasti Dhammika at 12:01 AM