Marriage (avaha vihaha) is the formal and legal joining of a man and a woman. It is a secular institution, an arrangement between two people or two families and thus Buddhism does not insist upon monogamy, polygamy, polyandry or any other form of marriage. There were several forms of marriage in ancient India, the most common being those arranged by the parents or guardians, those where the couple chose each other with the parents approval, and elopement. The ancient law books called this second form Svayamvara and the third Gandharva. According to the Buddha, monks and nuns should not get involved in ‘the giving or taking in marriage’ and thus they have never been marriage celebrants (D.I,11).
We have almost no information in the Tipitaka about the ancient Buddhist marriage ceremony other than that the bride was bedecked with garlands (A.V,264) and that her father tipped water over her's and the groom’s hands as a symbol of giving her away (Ja.III,286).
Traditionally, Buddhists practised the form of marriage which prevailed in the society in which they lived. Although the Buddha did not advocate any particular form of marriage, we can assume that he favoured monogamy. His father Suddhodana had two wives and as a prince he could have had several wives also, but he chose to have only one. In a discourse on marriage the Buddha only discusses monogamy, again implying that he accepted this as the best form of marriage (A.IV,91). Having been both a husband and a father, the Buddha was able to speak of marriage and 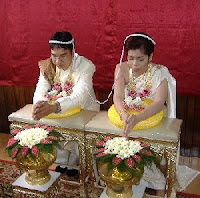 parenthood from personal experience. A husband, he said, should honour and respect his wife, never disparage her, be faithful to her, give her authority and provide for her financially. A wife should do her work properly, manage the servants, be faithful to her husband, protect the family income and be skilled and diligent (D.III,190).
The Buddha said that if a husband and wife love each other deeply and have similar kamma they may be able to renew their relationship in the next life (A.II,161). He also said that a couple who are following the Dhamma will ‘speak loving words to each other’ (annamannm piyamvada, A.II,59) and that ‘to cherish one’s children and spouse is the greatest blessing’ (puttadarassa samgaho etam mamgalam uttamam, Sn.262). He criticized the brahmans for buying their wives rather than ‘coming together in harmony and out of mutual affection’ (sampiyena pi samvasam samaggatthaya sampavattenti, A.II,222), implying that he thought this motive for marriage far better. Upholding fidelity in marriage he taught that adultery (aticariya) is against the third Precept.
The ideal couple in the Buddhist scriptures are Nakulamata and Nakulapita. Nakutap 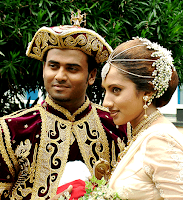 ita said that since his wife ‘was brought to my house when he was a young man and she a young girl, I have never transgressed against her even in thought much less in deed’ (A.II,61). The Buddha told him that he was ‘blessed, truly blessed to have Nakulamata full of compassion for you, concerned with your welfare, as your mentor and counsellor’ (A.III,298).
It seems that throughout history most ordinary Buddhists have been monogamous, although kings were sometimes polygamous and polyandry was common in Tibet until just recently. In the highlands of Sri Lanka during the medieval period polyandry was practiced. Today monogamy is the only legally accepted form of marriage in all Buddhist countries although the king of Bhutan has two wives, both sisters. There is no specific Buddhist wedding ceremony; different countries have their own customs which monks do not perform or participate in. However, just before or after the marriage the bride and groom often go to a monastery to receive a blessing from a monk.
Because Buddhism sees marriage as a social arrangement and not as a sacrament as in Christianity, it acc 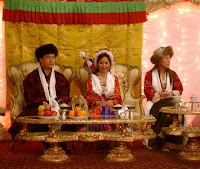 epts that if two married people agree to end their relationship they can do so. Buddhism and all Buddhist countries have always seen marriage as an institution worth supporting and maintaining but at the same time they have never had legal restrictions on divorce. I have been unable to find any information in the Tipitaka about divorce. It seems, at least during the Buddha’s time, that divorce was an informal affair. If a wife did not like her husband she would simply leave, return to her home and if she wanted, try to find another husband. Law books like Manusurti show that divorce, at least for Hindus, became subject to various legal restrictions and obligations.
The pictures above are (from top to bottom) a Burmese, a Thai, a Sri Lankan and a Tibetan bride and groom.
Posted by Shravasti Dhammika at 12:58 AM

Are you tired of seeking loans and Mortgages,have you been turned down constantly By your banks and other financial institutions,We offer any form of loan to individuals and corporate bodies at low interest rate.If you are interested in taking a loan,feel free to contact us today,we promise to offer you the best services ever.Just give us a try,because a trial will convince you.What are your Financial needs?Do you need a business loan?Do you need a personal loan?Do you want to buy a car?Do you want to refinance?Do you need a mortgage loan?Do you need a huge capital to start off your business proposal or expansion? Have you lost hope and you think there is no way out, and your financial burdens still persists? Contact us (gaincreditloan1@gmail.com)