Well, the Olympics have started. I’m going into hibernation for the next two weeks. Being just a simple monk, I find it difficult to get excited about one athlete beating another by 200 ths of a second. Or by someone I’ve have never heard of breaking a record set by someone else I’ve never heard of, in a sport I can’t understand. The recrimination, denials and legal maneuvers when an athlete is caught cheating also holds little interest for me. I happened to be in Australia staying with friends during the last Olympics. One evening we all sat watching the events broadcast from Athens. An Australian athlete was in a race and was expected to win. Everyone (except me) was glued to the television. When the Auzzie did win, my friends when completely berserk. ‘We won!’ they screamed and shouted, hugging each other and jumping up and down as they did so. Now for a simple monk like me this was difficult to understand. None of my friends normally take an interest in any sports, all of them are decidedly flabby and a bit overweight and none of them had moved from the couch for the last four hours. ‘We?’ I thought to myself. I at least, had nothing to do with the young man winning, although I am happy he did.
Now don’t get me wrong. I find the ideas embodied in the Olympic Spirit thoroughly noble ones. The idea of young people coming together to test their strength, their skills and t 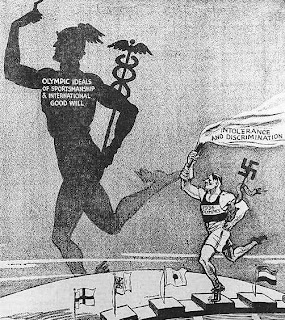 heir endurance against each other has the potential for much that is wholesome and good. According to legend, the Bodhisattva was quite the sportsman and competed in athletic games to win the hand of Yasodhara. However, the Olympic Spirit did not exist in ancient Greece where the purpose of the Games was to keep young warriors in shape for war. It was very much the creation of the eccentric Hellenphile dreamer Baron de Coubertin. We definitely needs more eccentrics- they do a great deal of good for the world. It’s the ‘realists;’ those who’s ‘heads are properly screwed on’ who spoil everything. They are the ones who have taken over the Olympics and turned them into a profit-making business and an exercise in jingoism. No wonder governments spend a fortune training their sports men and women – if their athletes win it ‘proves’ their country is better than the others. Is it a surprise that athletes cheat? – the endorsements they get if they win can make them millionaires. The Olympic Spirit was probably given the coupe de grace by Hitler when he used the Games as a showpiece for his ‘master race.’ I found the above cartoon from that time protesting Hitler’s perversion of the Games. The Chinese government is using the Games to win respectability from the outside world and divert their own peoples’ attention away from the rubber truncheons 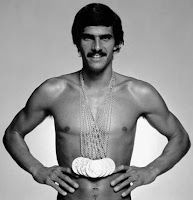 , the electric cattle prods, the public executions and the ‘reform through labor’ camps. This is, in de Coubertin own words, the Olympic Spirit – ‘The most important thing in the Olympic Games is not to win but to take part, just as the most important thing in life is not the triumph but the struggle. The essential thing is not to have conquered but to have fought well.’
Do you remember Mark Spitz? He had everything – stunning good looks, intelligence, stamina, grace and he won 9 gold medals, 1 silver, I bronze and set 33 world records. Then he quietly retired from sports to marry and raise a family and never used his fame to promote his ego or bloat his bank account. Now THAT’S the Olympic Spirit.
Tomorrow I will start my series of blogs on Buddhism and sex.
Posted by Shravasti Dhammika at 9:54 PM

"When the Auzzie did win, my friends when completely berserk. ‘We won!’ they screamed and shouted (...) ‘We?’ I thought to myself."

Hehe, I feel the same whenever I'm with people who talks about soccer, rugby, etc and they happily congratulate each other :)