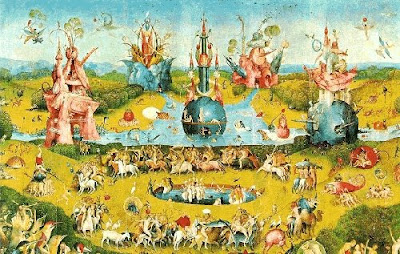 You might be interested to know that some two centuries after the Buddha, one of the points discussed during the Third Council was whether or not animals could be reborn in heaven. Those who believed that this was possible pointed out that Eravana, the mount of the god Indra, was an elephant. The Theravadins countered this by saying that if this was taken literally it would require that there also be stables, fodder, animal trainers, grooms, etc. in heaven too (Kv.XX,4). The picture is from Bosch's Garden of Earthly Delights, 1504.

Jake from Perth very kindly sent me the details of where to hear Les Crane's Desiderata. It's at http://au.youtube.com/watch?v=_kPzJWuG9RM&feature=related and it's good to hear it again after all those years. AQJB tells me you can hear the Deteriorata on iTunes and while your at it have a listen to the sound advice and gentle humor of Wear Sunscreen at http://homepage.ntlworld.com/gary.hart/lyricsl/luhrmann Thanks for that Minotaurus.

From the 2nd of next month I will be looking at the claim that Jesus visited India. I hope you will find my observations interesting.
Posted by Shravasti Dhammika at 12:01 AM

I was introduced to your blog by Justin Choo whom I found him a true gentleman. He gave me a book titled "Good Question Good Answer" written by you (printed by him and his family in memory of his late mother), and I found it very informative especially for someone like me who knows little about Buddhism, though regard myself as a Buddhist.

I used to share my thoughts about Buddhism in Justin's blog 'Life Is Like That', and I have benefited greatly from reading his blog.

I wish to do likewise in your blog but worry my level of understanding on Buddhism may not be appropriate and may in a way, tainted your sacred blog.

For this posting of yours, I am of the view that humans may not be at anytime more 'superior' than animals though we regard ourselves (i.e. humans) are of higher realm of existence. As such, animals could be reborn in heaven.

I found it interesting that, even after looking at larger image, that I could only find four "people of color" in that painting.

Dear Jamie,
Interesting observation, but perhaps explainable. (A) Bosch was a racist, (B) Bosh assumed that no blacks were Christian at that time and thus that there would be none in heaven, (C) that blacks do appear in the painting but that I have only shown the part with the animals.
If you picked C you were correct because Bosh's utterly magical painting does show 'Ethiops' (Ethiopians); very black, chatting amiably with whites and balancing apples on their heads. Interestingly, the right panel of this triptych shows hell and guess what? There are no 'Ethiops' there.

I wonder why there were no "Ethiops" in hell? (A) Bosch assumed that Ethiops were more or less animals, with no soul, so they wouldn't go to hell (as seemed to be the view of Medieval Christian Europe), so it would make sense that they wouldn't be shown in any or shown much in the panels, (B) I'm reading too much into it, as tends to be the Western post-modern response... everyone's a critic and an officer in the Politically-Correct Police, (C) I don't have a clue as to the reason and just thought it was interesting, as I find history interesting and art tends to reflect the Weltanschauung of its time.

If you picked (C) you are correct. Have a nice day.