That Buddhism is strongly against killing and emphasizes gentleness and kindness is well-known. But why? Why did the Buddha consider killing to be so wrong? There seem to be two main reasons for this. (1) Because beings treasure their life above all things and thus to threaten it or to take it is to inflict great suffering upon them and suffering is intrinsically evil. ‘All fear death…therefore one should not kill another’ (Dhp.129). (2) Knowing that deliberately killing someone is the worst thing one can do to them, it requires intensely negative intentions to do it which in turn reinforces such intentions making it more likely that the evil of suffering will be perpetuated. In other words, killing is not wrong in itself, it wrong because of its results - because it imposes on the victim something they do not want and it requires strongly negative intentions on the part of the killer.
All this would normally be the case. But we know that there are situations where someone can choose death because circumstances have made it a worse option that remaining alive. For example, a soldier captured by a barbaric enemy. Having vital information which, if it falls into the hands of the enemy, may lead to the deaths of many others, knowing that he is going to be tortured to get this information, certain that he will not be able to endure the torture and be killed afterwards anyway, he may decide to kill himself. People sometimes give their lives out of what is usually called at altruism; the fireman who enters the burning house to try to save the children trapped inside even when he knows he has only the slimmest chance of finding them alive and getting out safely; the two elderly gentlemen in the overcrowded lifeboat who ease themselves overboard so that the boat will sit higher in the water and increase the chances that the 36 other people in the boat will survive. Now in these cases (and they have all actually happened) it cannot reasonably be said that the persons concerned had negative intentions in killing themselves. In fact, their intentions were clearly to save lives. So I maintain that while killing oneself or another is almost always motivated by negative intentions, that this is not always the case. Interestingly enough, this is a point confirmed by Buddhism. In the Mahayana tradition, it is said that the bodhisattva may even give his or her life for the 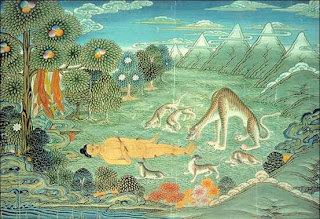 sake of others. The most famous example of this is the story in which the Bodhisattva cut his throat so that a starving tigress could feed herself and her cubs. The very purpose of this allegory is to suggest that compassion and courage can cancel out self-concern, the craving to live and identification with the body.
It should be noted that in only one of the 548 Pali Jatakas does the Bodhisattva give his life for someone else. However, the Buddha does say (approvingly) that a friend may be devoted to another enough to give his or her life for them (D.II,187) more evidence that killing, in this case killing oneself, need not always be negative. Incidentally, this same point is made in the Bible; 'No greater love has he than that he give his life for his friend.' How does this square with Archbishop Chia's idea of 'false compassion'?
Now, to return to the question of euthanasia - could someone kill themselves or asked to be killed and do so without negative intentions? Let's say that a woman has terminal liver cancer, she has been in terrible pain for the last month and it gets worst every day, the stench coming from her body is sickning, her veins have collapsed so that the nurses have to stab her six or seven times with the needle before they can administer morphine and the doctor has said that she has a week, perhaps two or three left. Lets say she decides she has endured enough and asks the doctor to (1) give her a lethal dose of morphine or (2) give her an injection containing a lethal done of morphine so she can administer it herself. What would be going through her mind at this time? The dominant ones would probably be (a) resentment and fear of the present pain, and others would be (b) desire to avoid the future pain, (c) revolution with the body. Now I maintain that a and b would have to be classed as kammicly negative but also that they will both continue and almost certainly increase if this patient decides not to end her life. As for c, it is exactly this outlook that the Buddha hoped to evoke when he encouraged his disciples to do the meditation on the unpleasant aspects of the body. So while a terminal patient who desires to end their life may have some negative intentions (and thus some negative vipaka) they are likely to have them anyway. Perhaps a highly developed meditator may be able to free themselves from such thoughts and intentions, but not the average person. And if the care-giver decided to leave a lethal injection besides her bed so that she can administer it to herself, what could their intentions be? Respect for the patients wishes, sympathy and compassion, desire to see them free from pain? Quite possible.
The picture is a Mongolian depiction of the Bodhisattva offering his body to the starving tigeress.
Posted by Shravasti Dhammika at 12:06 AM