After more than 30 years of a being asked questions about the Dhamma its rare that I'm asked a question for the first time. Well, it happened just last Sunday. A friend was perusing a Buddhist chat room where the subject of tattoos was being debated - apparently with considerable vehemence. He told me about this and then asked, 'Bhante, what would be the Buddhist idea about tattoos?' Never been asked this before! Now I want to make it clear that Buddhism is not like Orthodox Judaism, Islam or Catholicism which feel that they must have a 'position' on everything - sticking the stamp on the envelope upside down, flossing, basting a lamb in its own juice, tying your shoe laces with a double knot, parting your hair on the left or tattooing, and that need a committee of theologians who decided what is and is not acceptable. Thank goodness!! As far as I can see, I don’t think Buddhism has or needs to have a 'position' on tattooing. So I'm just going to give you my personal opinion as a Buddhist and a scholar of Buddhism and as I gave it to my friend.
There is no Pail or Sanskrit word for tattooing as far as I am aware and I think the practice was unknown in ancient India. In 25 years living in Sri Lanka I have never seen a ta 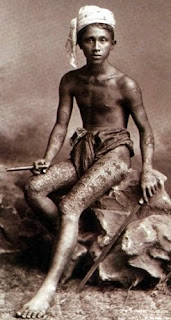 ttoo or even heard the subject discussed. Tattooing is common in Burma, Thailand, Laos and Cambodia and probably has its origins in the pre-Buddhist and tribal past. As in the West until recently, tattooing in these lands is associated with rough types, criminals and prisoners. The lower class of Thai monks often have tattoos and perform tattooing. Just as mafia types and Catholic priests in southern Italy often have close connections, petty criminals and Thai bhikkhus do too. This is because the former believe that magical diagrams tattooed on the skin will protect them from bullets and knives and the later are believed to know how to draw up such diagrams. I always associate tattoos with Ilsa Koch and every time I see one it makes me feel just slightly uneasy.
Today however, tattoos have risen above the underworld and become fashionable amongst ordinary people, although I suspect they still has a slightly 'naughty' air, a hint of danger or rebelliousness about them, and perhaps this is a part of its attraction to some people. As a fashion statement I can't see much difference between having a tattoo and wearing lipstick, makeup or earrings - except for one thing. Tattoos are difficulty and irksome to remove. The Buddha said, 'I know nothing that changes as quickly as the mind' (A.I,8). Therefore, before deciding to have a tattoo it might be good to consider these words. You may think it looks fashionable and 'cool' now, but what will you think ten years time? The fact that there is a thriving tattoo removal business suggests that many who had them before want to get rid of them now.
Quite by coincidence, Singapore's first ever Tattoo Fair is opening today. Remember the good old days when Singapore men with hair long enough to touch their collar would be 'served last'? I'm just sittin here watchin the wheels go round.
The picture is a 19th century photo of a tattooed Burmese boy. He has the face of an angel but the sword a bandit.
Posted by Shravasti Dhammika at 12:03 AM

Bhante-la: this is a big subject of interest among Western Buddhists. I myself have three Dharma-related tattoos, and started a broad-ranging discussion on the topic over at E-Sangha. Maybe that's what your questioner saw. I discuss my own tattoos and the motivations behind them here, here, and here. And you can peruse more Dharma-related tattoo galleries, along with people's personal stories, at The Worst Horse here.

In the Korean Zen tradition, anyone with a tattoo cannot ordain as a monk or nun. I don't know the background on this policy, but I suspect that it's fairly recent (since WWII) and is designed to keep organized crime and petty criminals out of the monastic orders.

True. I know an American woman who had to have hers lasered off before ordaining in the Korean tradition.

Who is Ilsa Koch? Why would you associate tattoos with him?

For Konchog, thanks for pointing out that a tattoo might have a meaning, for some people at least, higher than fashionable adornment. For Namkhim, Ilsa Koch was a she, a concentration camp guard who murdered prisoners with interesting tattoos, flayed them and used their skins to make lampshades, dust covers for books, wallets, etc.