A survey recently conducted by Harris Poll in the US found that 42 % of adults are not 'absolutely certain' that there is a God compared with 34 % who were asked the same question three years ago. Seventy six % of Protestants, 64 % of Catholics and 30 % of Jews said that they are 'absolutely certain' that God exists and the percentage climbed to 93 % among Born Again Christians. And how's this - when asked about God's gender 36 % said he is male, 37 % think its neither male or female, 10 % said they think its both male and female and 1 % think she's female. I wonder what results they would have got if they asked how many think he's Barak Obama? When asked whether God controls earthly events 29 % said 'yes' and 44 % said he, she or it observes but does not judge of interfere with what happens - something like a Vipassana meditator I suppose. That’s America. Heres a report on a religious survey recently carried out amongst older people in Briton
The Telegraph Group Limited
London: Only one in four older Britons wants the Church of England to remain the country's official religion, according to research that indicates a decline in belief among the over-50s. The survey of 15,500 adults found that the majority now worship or pray less frequently than they used to, and that many have lost their faith in God as they have grown older. A quarter now call themselves atheist or agnostic and a similar proportion (24%) supports the separation of Church and state. A further 28% wanted it to remain the established Church. Last month, the Archbishop of Canterbury, Dr Rowan Williams, said it would not be 'the end of the world' if the Church of England were to be disestablished. 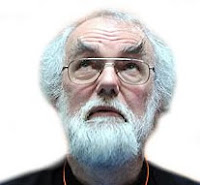 Terry Sanderson, the president of the National Secular Society, said: 'This is more bad news for the Church of England as even its most traditionally faithful demographic begins to desert it.' The poll carried out for The Daily Telegraph by Saga, the group that provides holidays and financial products to the over-50's, found that one in five of those surveyed said their religious beliefs were now weaker than earlier in their adult lives and 14 % said they now had more doubts about God's existence. A spokesman for Saga said: 'Because of the efforts of Church of England 'modernizers', older people can no longer be replied upon to be the backbone of the Church.'
The picture shows Dr. Rowan Williams checking just to make sure the Boss is still there.
Posted by Shravasti Dhammika at 12:41 AM

I see your point, Bhante, but devout Christians would point to Luke 18:8 ("But when the Son of Man[a] returns, how many will he find on the earth who have faith?”), meaning that all this was foreseen by Jesus and it's a sign of the end of times getting near.