We Buddhists are not exactly well-known for meaningful social engagement and effective social work; our strengths lie in other areas. However, things are starting to change and this is a good thing. Recently I highlighted the Fire Fly Mission, a new and small organization but one which has a lot of promise. When I hear of Buddhists practicing what I call 'practical compassion' I always take an interest and if possible try to get a first-hand look at what they are doing. Years ago I heard about and went to visit Wat Phra Baht Nam Phu, the famous AIDS temple in Thailand, and was very impressed. The whole place struck me as rather shabby and very haphazardly organized, but hey! it's Buddhist project. What do you expect? More importantly, it seemed to me that the abbot was genuinely concerned to help his charges and the place was making a positive difference to people's lives.
Then about nine months ago I met a young man who had volunteered there seven years ago when he was a medical student and again just recently as a doctor and he gave me a very different account of the place. He said, 'The abbot is not soliciting money so he can care for AIDS patients. He's pretending to care for AIDS patients so he can collect money.' I told him my impression of the place had 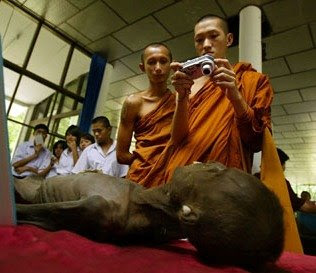 been very positive. He replied. 'Mine was too when I first went there but since then it has changed completely.' He proceeded to detail what he believed to be some of the many serious problems with the Wat, mainly financial. Then he said, 'I think the worst thing there is the so-called Life Museum where they display the mummified corpses of patients who have died and Thai tourists come and ogle at them. Then they tour the wards ogling at the patients. Supposedly this is to educate people but all it does is play up to the Thais' taste for the grotesque and the ghoulish. It's absolutely disgusting.'
This was rather sad to hear but I would have to admit that, if it's true, it conforms to a pattern I have often observed throughout Buddhist Asia. I know of many Buddhist charitable projects started with genuinely good intentions but that soon either stagnated, became ineffectual or, if they attracted generous financial support, degenerated into money-making rackets. When the latter happens, well-meaning but naive donors never asks for receipts for their donations, never ask for details or checks to make sure the place is being run properly. They just keep giving. Charity in Buddhist lands is still pretty much medieval - throw a coin at a beggar and keep walking. The Buddha said that we should give 'thinking about the results' (agamana ditthako, A.III,172) i.e. whether the money donated is being used properly and effectively so that it actually makes a difference. Such considerations rarely seem to occur to anyone and if the person requesting the donation or receiving it is a monk, it never does. The Sunday Times has published a highly unflattering article on Wat Phra Baht Nam Phu. It is a very disappointing story but I suspect most of it is true. Have a look at
http://www.timesonline.co.uk/tol/news/world/asia/article3721675.ece?token=null&offset=0 To read the Wat's account of its activities see www.aidstemple.th.org . None of this is particularly inspiring reading. But if we Buddhists just keep smiling and pretending everything is okay, then things are unlikely to ever improve. If any of my readers have visited or volunteered at Wat Phra Baht Nam Phu, please give us your impressions.
Posted by Shravasti Dhammika at 12:27 AM

Dear Bhante, "Times" article was not only "highly unflattering", but also shocking to me. I'm always being surprised by the fact that there is actually no limit to someones greed, no matter if he wears even a robe. Which makes his greed only more disgusting to me.

There are still a lot of people who are in destitude and need help. Help that is very little from this very materialistic society.

That the lesser fortunate will simply be forgotten in no time.

All these flying around helping the 'poorer countries' ain't really impressive.

i agree with bhante and yamizi. you dun get to see the poor and down along orchard road; in fact if one cares to sit at orchard road and observe..you only see beautiful people....
And if you were to ask me; almost all charities in Singapore will get into trouble if auditors were to come knocking on their doors and check their accounts throughly...i know most dun need 3 quotations for any big project bids...(anyhow..i find the 3 bids thingy full of loopholes; i can still give my friend the job and eliminate the other 2 quotes by just telling my friend to quote slightly lower than the other 2)
I guess the main point i want to say here is i strongly suspect cos charity money is "easy money"; people dun really think twice when spending it on themselves...

i have read the link. i think the real Buddhist there is the Catholic priest, who was the longest serving volunteer.

i think charity is something we should emulate from the christians.

I think the comments left by Thai readers in Bankok are interesting. The usual: "You don't have any right to criticise my country if you're not from it!" and so on and so forth. They inadvertently reinforce the thrust of the article.