And A Woman Shall Not Be Subservient

The other day someone asked me what the Buddha had to say about the relationship between husband and wife. ‘I suppose it’s the usual “and the wife shall be subservient to her husband” my questioner said. I wasn’t able to answer straight off because I wasn’t quite sure of the answer. So I checked it up and this is what I found. In the Anguttara Nikaya the Buddha comments than one of the onerous things about being a woman is that she is always subservient to a man (S.IV,239). This was not said by way of approval but only as an observation on how things are (or were), a ‘suffering’ (dukkha) for women.
When he was addressing his disciples he did speak of how he felt that it should be. In the Sigalovada Sutta the Buddha speaks about the duties a husband and wife should have towards each other. ‘He should honor her, not disparage her, not be unfaithful to her, give h 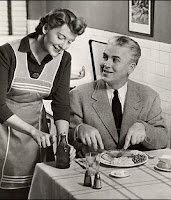 er authority, and provide her with adornments…She should organize her work properly, be kind to the servants, not be unfaithful, protect the family wealth and be skillful and diligent in all she does’ (D.III,190). I think the two most important things here are that both should be faithful (naticariya) to each other and that the husband should give authority (issariya vossaggena) to his wife. In the Buddha’s day that probably meant authority within the household. I think it would not be at all unreasonable to interpret this as applying to many more areas of life. When Nakulapita was critically ill his wife Nakulamata nursed him with great devotion and kept up his spirits with constant encouragement and . when the Buddha came to know about this he said to Nakulapita, ‘It is a gain, a great gain for you in having Nakulamata full of compassion for you (anukampika), full of love for you (atthakama), as your mentor (ovadika) and teacher (anusasika, A.III,298). For someone to mentor and teach you, they have to be your equal or superior, at least in some areas. You need to be open enough to take their advice and they need to be confident enough to give it. Again this does not suggest a woman being in a passive or subservient position. In the Anguttara Nikaya the Buddha speaks of four things whereby a family prospers and endures. One of them is that they put in authority a virtuous woman or man (silavantam itthim va purisam va adhipacce thapenti, A.II,248).
The word adhipacca which I have here translated as ‘authority’ means, according to the PTS Dictionary, being overlord, supreme rule, lordship, sovereignty, power. The only thing I can find that the Buddha said suggesting that a wife should be subservient in at least some way to her husband is in the discourse where he talks about the seven types of wives, the last four of which he seems to approve of. These four are the mother-like wife, the sister-like wife, the companion-like wife and the slave-like wife (A.IV,). One of the qualities that the fourth of these should have is that she is ‘obedient to her husband’(bhattu = husband, vasa = under, anuvattana = comply with, go according to).
So that’s it. All this together is hardly a ringing endorsement of the idea that a woman must take an inferior position in marriage and render authority to her husband.
Posted by Shravasti Dhammika at 1:04 AM

Exhibit A - Roger and Mirka Federer.

If I remember my first history lesson, Early Man did not have wives. Probably in primitive society today, the concept of marriage does not exist. Woman has been considered the 'weaker' gender because of their physique, nature and disposition - less aggressive? Perhaps, for these reason, the idea of 'subservient' came about. While subservience has been touted as a virtue, often it is used as the excuse for abuse, bully, harassment, unreasonable demand, unequal treatment, privilege and reward.
There is a difference between harmonious, agreeable, sensible obedience versus complete obedience (subservience). I am not comfortable with the concept of 'complete' obedience and wife having to be subservient. Why is it that nobody talks about husband being subservient to wife?

The power and independence of the courtesan, accomplished woman "entrepeneur," was well demonstrated by the redoubtable Ambapali, who not only refused to relinquish her opportunity to offer hospitality to the Buddha despite the Licchavi princes protests, but also went on to donate a lovely grove to the Buddha and Sangha, become a bhikkhuni, and an arahat as well.