A bridge (sankama or setu) is a structure built to allow persons or vehicles to proceed over obstacles like rivers, valleys or gorges. The Buddha mentioned building bridges for the public good as an example of a meritorious deed. He said ‘Those who lay out a park or garden, who construct a bridge, a watering place or a well, or who build a rest house, their merit increases both day and night’ (S.I,33). In the Kulavaka Jataka, the Bodhisattva is depicted as a civic-minded villager who removes large stones from the surrounding roads, cuts down trees that might strike wagon or chariot axles and who constructs bridges, watering places and rest houses for the convenience of travellers (Ja.I,199). Ancient India, unlike Rome or ancient China, was not a bridge building culture and no bridges from ancient times survive. The Tipitaka mentions a bamboo bridge (Tha.7) and what it calls ‘a reliable bridge’ (dhuvasetu, Vin.I,106) which the commentary defines as one strong enough for a caravan, elephants or horses to cross.
As crossing a river is frequently used as a metaphor for the spiritual endeavour in the Tipitaka, building bridges, paying for their construction or repairing them, seems to have had a particular attraction for early Buddhists. A dozen or so Mahayana sutras mention the virtues of building bridges. The Sarvagunapunyakshetra Sutra for example, mentions seven ‘fields of merit’ (punnakhetta), the fourth of these being ‘maintaining ferries to help people cross rivers’ and the fifth ‘constructing bridges so that the ill and weak can cross rivers’. As Buddhism spread it took this expression of practical kindness with it.
That versatile genius Thangtong Gyalpo (1385-1464) built over 50 chain suspension bridges throughout Ti 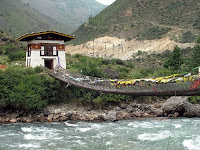 bet and Bhutan. Several of his bridges in Tibet were still in use until the middle of the 20th century, and two in Bhutan are still used. Records show that building bridges as a religious practice became very popular in China and Japan. The ‘Technical Skills’ section of the History of Song, mentions a monk named Huaibing who constructed a pontoon bridge moored by eight anchors. Another work, the Sichuan tongzhi, reports a monk saying: ‘At first I thought that the greatest source of merit came from carving wooden statues and clay images of the Buddha. But one day I realized that the true ‘ladder and boat of merit’ was to help other people and other beings’. After this, the monk embarked on a program of building bridges. Chinese sources that refer to bridge construction by monks or devote lay people frequently mention that they did it out of ‘pity for the difficulties of the people’ or out of compassion ‘for people who drowned in boats attempting to cross the river’.
The Japanese monk Dosho (629-700) was famous as a road, dam and bridge engineer. One of Japan’s most famous pre-modern bridges, the elegant Spectacle Bridge’ in Nagas 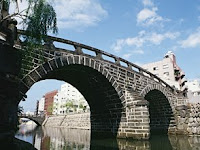 aki, was designed and built by the monk Mokusunyoujo in 1634. This innovative structure was the first stone-arched bridge in Japan and is still in use today. It was given its name because when its two arches are reflected in the water it looks like a pair of spectacles. I have been unable to find any records, ancient or modern, of bridges being built as an act of merit from Theravadin countries. Can anyone help?
The information about bridge building Chinese monks which I have given here is only some of that mentioned in John Kieschnick’s fascinating The Impact of Buddhism on Chinese Material Culture published by Princeton University Press, 2003.
Posted by Shravasti Dhammika at 1:15 AM

[The King] Devappatiraja ... took the image of the god (Sumana) along with him in festive processions, set forth, betook himself first to the village Bodhitala and began from here to build bridges. Here at the mouths he made a large and magnificent bridge of thirty-five cubits, and over the Khajjotanadi one of thirty cubits, likewise at Ullapanaggama one of thirty-six cubits, at Ambaggama one of thirty-four cubits in lengths. (The bridges were) very strong and good so that elephants, horses, cattle and buffaloes could pass over them.

[The King Vijayarajasiha] to the east and west (of the town) where water made the road impassable, he had stone bridges put up for the comfort of those coming and going.

Thank you once again, Ven. Anandajoti, for drawing attention to something I had missed. So often when I go sniffing around in neglected corners I find ‘you-know-who’ has already been there.