Several religions include the idea that sex has some spiritual dimension or even that it is an essential element in spiritual development. Catholicism sees marriage a sacrament which is incomplete without intercourse. Indeed, a marriage can be annulled if sex does not take place. Apparently it is even considered a sin to enter into a marriage with the idea of not having children. Most Protestant churches do not consider marriage to be a sacrament but most teach that sexual gratification is ‘a gift from God’. Thanks for that God! Certain movements within Buddhist and Hindu tantra teach that sexual license is proof of complete detachment from social norms or that the orgasm can be a means of attaining Nirvana. What is passed off as ‘tantra’ by some New Age proponents is actually just good old-fashioned sex with a bit of gimcrack philosophy thrown in. 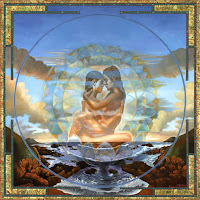 There is a growing body of literature by Western Buddhists anxious to convince us that the more nooky you can manage to get, the more likely you are to attain enlightenment. I haven’t read Mark Epstein’s Open to Desire – Embracing a Lust for Life yet, but the title suggests it might be in this genera.(Why do we always have to ‘embrace’ the subject under discussion?) Jeffrey Hopkins’ The Tibetan Arts of Love - Sex Orgasm and Sexual Healing, certainly is. The fascinating thing about such books is that they focus almost entirely on a minority movement within Buddhism, tantra, and even fail to mention that the dominant Tibetan sect, the Gelupa, teach an attitude to sex almost identical to that of early Buddhism, Theravada and mainline Mahayana. But of course, as the advertising industry learned long ago, there is nothing like sex to attract the attention.
Completely against the majority opinion, some ascetics during the Buddha’s time thought it consistent with the ascetics’ to indulged in sex with ‘those female ascetics who wear their hair in a topknot’. They would say ‘What future disadvantage do these good monks and priests see in sensual pleasures so that they speak about understanding and renouncing them? The velvety-soft arms of a female ascetic are pleasant indeed’. The Buddha contradicted this view in the strongest terms (M.I,35). When a monk named Arittha got it into his head that ‘those things (i.e. sensual pleasures) the Lord calls obstructions are not really obstructions to someone who indulges in them’ (M.I,130), the Buddha was quick to both rebuke and to correct him. ‘Foolish man! Have you ever known me to teach the Dhamma like that? Foolish man! In many talks have I not stated that sensual pleasures are obstructions that obstruct the one who indulges in them? I have always taught that sensual pleasures give meager gratification, much trouble and frustration and embody great danger’ (M.I,132).
The Buddha talked about sex within two contexts – the Precepts and celibacy (brahmacariya). Following the third Precept assists the preliminary stages of the Noble Eightfold Path, as do the other Precepts. (On the third Precept see my post of August 12th 2008) Thich Naht Hanh’s expansion of the third Precept is helpful in suggesting how sex within the bounds of the third Precept can help one’s spiritual growth. ‘Aware of the suffering caused by sexual misconduct, I vow to cultivate responsibility and learn ways to protect the safety and integrity of individuals, couples, family, and society. I am determined not to engage in sexual relations without love and long-term commitment. To preserve the happiness of myself and others, I am determined to respect my commitments and the commitments of others. I will do everything in my power to protect children from sexual abuse and to protect couples and families from being broken by sexual misconduct’. But even lay practitioners are encouraged to abstain from sex on certain days, i.e. full moon days, in preparation for gradually freeing oneself from sexual desire. Monks and nuns, whose lifestyle is designed to ‘fast lane’ spiritual realization, undertake celibacy because it helps greatly in this endeavor. The Buddha taught that a person can attain the first stage of enlightenment (sotapati) while being married and having normal sexual relations. Attaining the second stage (sakadagami) requires sexual restraint and probably for many people, celibacy. To progress beyond this point to full enlightenment in the present life, requires a complete detachment from all sensual desire. Or perhaps it might be more correct to say that one will attain full enlightenment when all sensual desire has faded away. ‘Sexual intercourse must be transcended, the Lord has spoken of breaking down the bridge of sexual intercourse’ (Methunasambhuto ayam bhagini kayo methuno ca setu ghato vutto Bhagavata, A.II,145). The fading of passions (viraga) precedes freedom (vimutti, S.II,30). This is the position of all schools of Indian Buddhism until the emergence of the tantric movement, which, it should be noted, was always a minority movement and one strongly criticized by all other Buddhist schools.
While mentioning tantra, I might offer a brief reflection on the origins of this movement within Buddhism. It is a complex and difficult problem, some areas of which are dealt with brilliantly by Ronald Davidson in his Indian Esoteric Buddhism - A Social History of the Tantric Movement and David Snellgrove in his Indo-Tibetan Buddhism, but I suspect that the betrayal of monastic celibacy in some quarters had at least something to do with it. When the Chinese pilgrim Hiuen Tsiang was in Sindh in the 7th century he noticed that the monks there were ‘mostly indolent and with corrupt characters’ and that the few good monks kept apart from them, living in the forest. The people ‘shave their heads and ware the robes of monks, whom the resemble outwardly, while they engage themselves in ordinary life’. Reading between the lines we can get some idea of what went on in Sindh. As religious fervor declined, some monks began cohabiting with woman, probably in secret at first, but as such behavior became more widespread and ‘acceptable’ they started to do so openly. Their sons inherited the monasteries and their attached lands and supplemented their incomes conducting pujas and doing ceremonies for ‘ordinary’ people. Of course, it would have been necessary to justify such compromises and a body of literature grew up which did just that. We know of similar cases of monks gradually evolving into married priests – the Kandyian Kingdom in the 15th/16th centuries and in Japan in the 19th century.

A powerful force. I remember reading somewhere in the suttas (please forgive my exceeding poor memory and correct me if I am wrong) that there was a monk during the Buddha's time who couldn't concentrate in his practice as he was always thinking about fair maidens. So the Buddha, with his psychic power, conjured up in this monk's mind the images of the most attractive female inhabitants of the Tusita (?) heavens. This spurred the lusty monk to practise very hard so that he could get there, and eventually he did. :-)

Dear no,
the monk you are thinking of was the Buddha's half-brother Nanda, and he eventually attained, not Tusita heaven, but Nibbana. The canonical story can be read here.

Dear Anandajoti,
Thank you, I have read up the source.

Thanks for such a detailed and elegant piece. I was confused by Mark Epstein’s Open to Desire and started looking for comments on his book, and happened to see your article. It helps clarify many of my confusions about that book. Thank you again for the wonderful teaching!