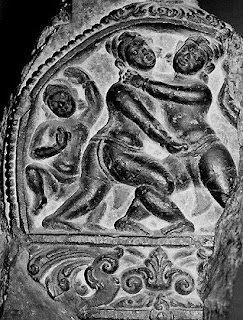 I found this image the other day. It is of two ancient Indian wrestlers and it is interesting for several reasons, the main one being this - ancient Indian art only very rarely depicts everyday life beyond dancing, warfare or court life. While Egyptian, Roman and other art often show butchers, bakers and candle maker, vintners and ox herders, working or going about their trades, such scenes are uncommon in Indian art. This means that those (like me) who wish to know something about daily life in ancient India have to depend almost entirely on literary sources. Indians have always looked upon work, particularly manual work, and even just physical exertion, as demeaning. (There are well over a billion Indians and how many Olympic medals have they won?) The Vinaya's prohibition against almost any type of manual work reflects this same attitude.
The depiction of the two wrestlers and their appreciative onlooker is a fragment from a larger sculpture and dates from about the 10th century. Wrestlers (Pali malla, Hindi mall) and wrestling (nibbuddha) are occasionally mentioned in the Tipitaka as is boxing, literally 'fist fighting' (mutthiyuddha), and wrestling matches (uyyodhika). Monks and nuns were not supposed to watch wrestling matches (D.I,6) and I agree with this restriction entirely. Anyone who can sit through an episode of World Championing Wrestling on the TV needs counseling, if you ask me! The Ghata Jataka actually describes a wrestling match. It was held in a wrestling ring (yuddhamandala), their were tires of seats around the ring and the wrestlers came out 'strutting, jumping, shouting and clapping their hands' (Ja. IV,81).
Today, traditional Indian wrestling is called Kushti or Pehlwani and is a mixture of the wrestling done at the time of the Buddha and elements introduced by the Mogals from Persia. BBC just happens to have a program called Last Man Standing which includes scenes of traditional Indian wrestling. Have a look at http://www.bbc.co.uk/homearchive/2007/06/26/
Posted by Shravasti Dhammika at 1:22 AM

I really like your site http://buddhismatoz.com/ . However, most of the times when I need dhamma, I'm out of my computer so I put offline copies of dhamma on my phone. For example, I have accesstoinsight.org's offline website on it for viewing when I need something.

Would it be possible for you to have a link to download the whole http://buddhismatoz.com/ site to a zip file so that it can be viewed it locally?

Before anyone put up that link, meanwhile you can copy the website locally with a tool like:
http://www.httrack.com/

Dear Izblue,
Thank you for introducing this very useful software.