By The Light Of The Moon

The uposatha are the days of the full moon, half moon and the two quarter moons of each month in the ancient Indian calendar. In pre-Buddhist times the upavasatha was the fasting day preceding the Vedic sacrifice. This Sanskrit word and its Pali equivalent means something like ‘fulfilled’. In some ways the uposatha is similar to the Jewish and Christian Sabbath, except of course that one is not obligatory to observe it. 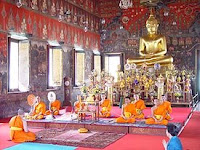 However, the Buddha certainly recommended lay Buddhists use these holidays to ‘purify the soiled mind in the right way’ (upakkilittassa cittassa upakkamena pariyodapana, A.I,207). He encouraged them to pay homage to their parents on such days, to do good works, spend time in quiet contemplation and abide by the eight Precepts (A.I,143; 207). To use the uposatha for such activities was, he said, like polishing a tarnished mirror with oil, ash and a hair brush (A,I,209). He praised reserving the uposatha days for such activities in these words: ‘Pearl, crystal, beryl and gold are not worth a sixteenth of the uposatha made whole with the eight Precepts. Nor is it outshined by the moon and the celestial bodies’ (A.I,215).
Until the introduction of the Gregorian calendar in most Buddhist countries, the uposathas were public holidays. In Sinhalese they are called poya, in Burmese ubot nei, and in Japanese roku sainichi. Monks and nuns use the full and half moon uopsathas to chant the Patimokkha in congragation.
Posted by Shravasti Dhammika at 3:13 AM

Thanks for this post! In French, we’ve always called them jours du Bouddha.

thank you. Are there any articular chants which are good to chant when its full moon