The Life Of Nyanatiloka Thera

Autobiographies and biographies have never been a significant literary genera in Buddhism or in Asia in general. Even biographies of the Buddha were rather late in coming and even then were more hagiographies or romances than sober accounts of the lives of their subject. The same is true of modern Asian and Western Buddhists - except for the Dalai Lama of course; one autobiography, at least a dozen biographies to date, one by his brother, another by his sister, one about his family, etc. He’s a very well-documented individual. So far, Western Buddhist

writers have focused mainly on explaining Dhamma rather than writing about their experiences of being Buddhists. However, a new book by the Buddhist Publication Society is such a work. The Life of Nyanatiloka Thera – The Biography of a Western Buddhist Pioneer is a long overdue account of the most important of those special individuals who helped the Dhamma get established and accepted in the West. And it is absolutely fascinating reading. Although made up of six quite separate parts, each written by a different author, the editors have put the book together in a readable and flowing manner. The first part is a history of Buddhism in Germany from the beginning until 1931. This is followed by Nyanatiloka’s autobiography which only goes up to 1926. Helmuth Hecker’s carefully researched Biolographical Postscript takes it from there to Nyanatiloka’s passing in 1957. This is followed by Bhikkhu Bodhi’s biography of Nayanaponika, the subject’s most influential disciple. Then comes Nyanaponika’s assessment of Nyanatiloka’s literary legacy and a bibliography. Equally useful is the last Appendix, The Monk Disciples of Nyanatiloka, giving brief biographical details of all the people who ordained under the great man. And finally there are the notes, a whopping 59 pages of them, some of them two or three pages long. Generally I dislike long notes or too many of them. However, most of these notes provide important background to Nyanatiloka’s times and details about his many interesting acquaintances, admirers and helpers. A few notes seem superfluous. Do we really nee 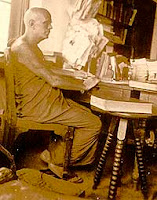 d one telling us that Jawaharlal Nehru was leader of India’s independence movement and the countries first prime minister?
For a monk, Nyanatiloka had a very eventful life. He traveled through China alone and with very little money in the 1920, he worked as a university professor, was twice imprisoned as an enemy alien, was an acquaintance of many of the European avant garde and survived the great Tokyo earthquake. Such was his impact on Buddhism in Sri Lanka that he was given a state funeral.
The thing that emerges most from Nyanatiloka’s life is his apparent quite, patient and uncomplaining determination to live the monk’s life no matter what obstacles were put in his way. And lots were. One is also amazed that despite exile, imprisonment, official harassment and frequent homelessness (or actually 'monsterylessness) his literary output was enormous and of the highest standard. He translated numerous Buddhist text and wrote dozens of books and articles, many of them of enduring value. Although there have only been a few Western Buddhist monks and nuns their contributions to the Dhamma have been out of all proportion to their numbers. But none yet have exceeded the inspiring example, the dedication, the courage of Nyanatiloka.
Having said all this The Life of Nyanatiloka Thera has a serious downside. The editing of this otherwise terrific book is truly abysmal. There is hardly a paragraph which does not contain spelling mistakes, syntactical errors and stylistic peculiarities. The editors’ unfamiliarity with spoken English is painfully obvious. ‘Silananda did not know the exact whereabouts of Ananda Metteyya’s address’, ‘the food was very one-sided’, ‘Venerable Vappa was ‘an expert in the field of food’, ‘I decided to find my luck further south’, ‘the cosmopolitan crow is not absent here too’, ‘There were six of them, as high as a man’s height’, ‘I would then go back to my homemade sleeping bag with my feet full of mud’. ‘The ship’s engine was working so hard that the turbines caused waterfalls’, ‘The winter appeared to be over soon’, ‘this countryside was the ever-same yellow color’, ‘it turned out to be a great piece of good fortune for us’, ‘He reported about the keystones of the teachings explained to him by the German Buddhists’, ‘you have been thinking for years of the thought of naturalizing in Ceylon’.Some sentences are hopelessly awkward or far too long. ‘My father died in 1931, two days after an operation for cancer, and truly peacefully so, while my mother sat on his lap, and was discussing with her and my sister a journey they were planning to take to Switzerland’. ‘Coming back from the Galduva monastery that Robert de Soysa, the former supporter in Matara, had donated to me, I was arrested in Ambalagoda by a detective, just as I was standing in front of de Soysa’s house wishing to say goodbye to him before catching the last train to Dodanduva’. ‘Moreover, also without exception, including Buddhist and Christian monks and priests, everyone had to clean the toilets, which were used by the Australian soldiers as well’. ‘One evening, after a theater performance, all the inmates – including those inmates who had been acting and were still wearing their costumes – left with their travelling suitcases, and so on, through this tunnel, but when the leader reached the exit of the tunnel and had to throw out his suitcase in order to follow himself, there were gunshots outside’. Some phrases indicate the editor serious lack of knowledge of English usage. ‘(T)he Police President’ probably should have been the commissioner of police, ‘vegetable tins and milk tins’ probably meant to be tinned vegetables and tinned milk. We also have ‘snow sliding’ instead of tobogganing, ‘gong music’ instead of ‘the sound of gongs’, ‘guards with bayonets affixed’ instead of ‘with fixed bayonets’, ‘departure meal’ instead of ‘farewell meal’, ‘fore-mountains’ instead of foot hills, ‘Supreme judge’ rather than high court judge, ‘SMS Sydney’ instead of HMAS Sydney and scholastism’ instead of scholasticism, to name but a few. The meaning of some other words and phrases can only be guessed at - ‘my ears froze and then burst open’ ‘an acquainted waiter’, ‘disrobals’ and ‘churchly’ being some of the more humorous one. And what are we to make of ‘romantic necrophiliac’ on page 227?
The book has also been very poorly produced. In my copy pages 242, 243, 246 and 247 are blank and the cover came unstuck after the first reading. Also, while some of the pictures in the book relate directly to the text, others seem superfluous. Was it really necessary to have a picture of Kaiser William, the Yangtze River and an unnamed temple in Chungking? Such pictures have left too little room for the rare and more relevant ones. The picture of Sister Upalavanna is a minute 3 centimeters square and one plate has 10 separate pictures crammed onto it.
Posted by Shravasti Dhammika at 12:13 AM

I still refer to his "Buddhist Dictionary" to find answers.

From the Preface, this book seemed to have been written at the Central Internment Camp, Dehra-Dun, India dated 28-8-1946.

Thanks for reminding of this wonderful monk's life. Batchelor's Forward struck an odd note, though, when he wrote: "Yet what strikes one on reading his story is that the fanaticism or stubbornness one might expect in a trailblazer seem entirely absent in him." Why sould we expect fanaticism in an educated, intelligent, artistic, sensitive Western convert to Buddhism? The splendid life Ven. Nyanatiloka led should be what one would expect of such a person perfectly confident of the Buddha, Dhamma and Sangha and seeking Nibbana.

Could it be that this book was, err, proof-read by the same person who passed to the press Kanai Lal Hazra's "Thailand - Political History and Buddhist Cultural Influences"? A couple of quotes from this book: «In this kingdom the artistic activities in art, architecture and sculpture took place very much and this was happened under its patronage one for this reason it became known as the Dvāravatī school of art.» (p. 411), «The capital of pillars was made in the style and design of Bua Klum or lotus cluster and there was not abacus of pillar and there was the hole.» (p. 448).

Dear Alessandro,
I know the book you are referring to. The author’s several other books are just as bad. But no, the two books were edited by different people but I would swear they are twins.
As I recall, you are living in the Amazon somewhere. If you give me your address I will send you some books (with proper editing).