In the two months before visiting Tibet I read up on the country and its culture, its religious and political history and on Mt. Kailash. I always like to know what I am seeing and the background it. If you ever intend in going there or just wish to know about this fascinating country you might consider having a look at some of the books I read. I recommend them all although

some with reservations. Our main guidebook to Tibet and Mt. Kailash was Lonely planet’s Tibet and Prichard Jones and Bob Gibbon’s The Mount Kailash Trek. I recommend the first and although the second contained all the information one would need to circumambulate the sacred mountain it contained too much irreverent info which tends to obscure the essentials. I think the authors could be accused of padding.Charles Allen’s A Mountain in Tibet and John Snelling’s The Sacred Mountain are both excellent for all the background, cultural, spiritual, geographical and historical, on Kailash. And of course, if you can get a hold of the indomanentrable Swami Pranavananda’s Kaliash Manasarovar its almost the next best thing to actually going there.
As for the background to the present situation in Tibet I read Melvyn Goldstein’s A History of Modern Tibet, vol. 1 and 2, On the Cultural Revolution in Tibet, and The Struggle for Modern Tibet. Goldstein just tells it as it is – objective, factual, non-romantic and detailed, although romantic Western Tibetan Buddhist will find it very different from what they have been lead to believe about the old theocracy. Tom Grenfeld’s Making of Modern Tibet is another story. He is a professional historian but I get the impression that he is just a little too soft on the communists and a bit too hard on the Tibetans.
Tubtan Khetsun’s Memories of Life in Lhasa Under Chinese Rule offers a rare and chilling first-hand account of what the communists did during the Cultural Revolution. Because there are almost no visual records of what happened then, its true horror doesn’t have the impact it would have otherwise – an ancient traditional culture suffering the full force of a brutal totalitarian, ideologically-driven state determined to completely transform it. But one photo, from Chinese sources and which I reproduce here, gives at least some idea of that terrible time. 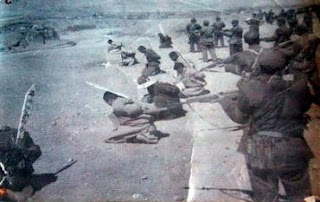 While things are bad for the Tibetans its not all bad, according to Goldstein and Kapstein’s Buddhism in Contemporary Tibet, the religion is undergoing something of a revival. And this despite constant restrictions and interference by the Chinese. Lets hope it holds out at least until the situation improves.
I finish with this picture of Rombuk Monastery near the foot of Mt. Everest taken in 1903 which I compare with my picture taken two months ago. And with this posts about my trip to Tibet finish. Tomorrow back to Dhamma and Dhamma-related posts. 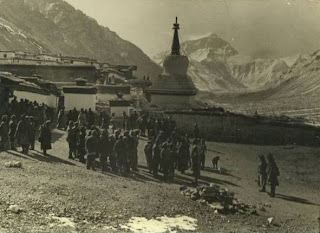 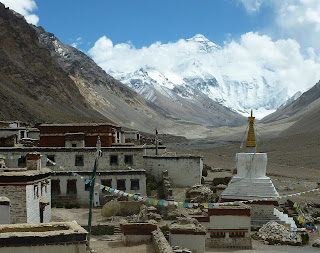 Posted by Shravasti Dhammika at 12:20 AM

Thank you for your wonderful series of posts on your travels in Tibet. I had the good fortune of visiting Tibet in 1996 with Zen Master Seung Sahn. Although our travels weren't as extensive as yours, everyone on the trip felt the deep commitment to practice of many people in the region. For me, it was eye- and heart-opening.