Blood sports are games or entertainment that draw animals’ blood, either by injuring or killing them. They can involve animals, either of the same or different species, fighting each other, or a human being hunting or fighting animals. Cockfighting, bear bating, fox hunting and falconry would be examples of the first of these, while bull fighting would be an example of the second. The enjoyment of blood sports is derived partly from betting on the combatants and partly from testing one’s skill or courage against the animal. For some people at least, a perverse glee in inflicting or watching pain being inflicted is part of the attraction of these activities. Some of the blood sports popular during the Buddha’s time and mentioned in the Tipitaka included elephant, buffalo, bull, ram, cock and quail fights. Fighting quails may sound rather curious but male quails are very pugnacious birds and fight furiously when they encounter each other. It seems likely that at least of these fights did not involve the animals being killed. For ordinary people, the most common blood sport was cockfighting (kukkutayuddha) which seem to have been a feature of fairs and village gatherings. The Karma Sutra mentions the rules of cockfighting. In their natural state cocks do not kill each other. Only when humans attach sharp metal daggers to their spurs does this happen. I can find no reference to this being done in ancient India. 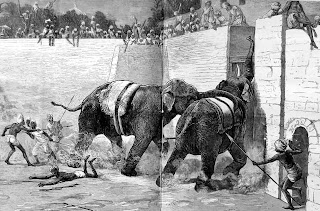 The Buddha said that monks and nuns should not watch animal fights because they were considered a vulgar entertainment and because they involved cruelty (D.I,6). For monastics and lay people participation in blood sports would be against the first Precept which requires that we have ‘care, kindness and compassion to all living beings’ (D.I,4) There is no tradition of blood sports in Sri Lanka that I know of, and I understand that there is none in Tibet, Korea or amongst Chinese Buddhists either, probably because of the influence of Buddhism. Cockfighting to death is popular in both Cambodia, Burma and Thailand. How someone calling themselves Buddhist could derive enjoyment from watching animals kill each other is very hard to understand.
The picture shows an elephant fight in Baroda, India, in the 19th century.
Posted by Shravasti Dhammika at 11:59 PM

And the US state of Michigan was the first English-speaking government to ban the death penalty. So there's that. :)

Sadly all the Things(Cock Fight) u said Exist even now in Villages in Tamil Nadu.

On the Pongal Day (Jan 14) Bull Taming is done as a Manly Sport..
Bulls are not Ferocius, but these cruel guys Smear Chilli Powder in its Urinals and Give the Animal Local Toddy(Strong Alcholic Drink)
The Government Banned it but it was Popular and the govt was Forced to lift the Ban :-(


Btw i saw a mail which said that Lot of Dolphins are Masaccered as a Sport in some Europen Country ..So Animal Slaughter as sport Sports Exist even today in Europe & Asia..:-(

The was a fascinating article in the New Yorker magazine about one month ago that compared dog fighting to the sport of American football. In both sports, the participants (dog & humans) are "gamed" by their owners (professional athletes are "owned" by their teams) into self-destructive behaviors. Professional football players suffer severe and lasting brain injuries that result in catastrophic outcomes for themselves and their families.

After reading this article, I find it very hard now to watch a football game. Perhaps I'll become a soccer fan, which is what we Yanks call your football.

Would watching torture movies and horror movies be considered as condoning or passively involved in the acts of cruelty (similar to watching animals fighting)? Lets say that watching those movies evoke a feeling of fear, disgust and curiosity all at the same time.