Buddhism as it exists in Asia is extremely conservative, or perhaps better, set in its ways. Of course, I wouldn’t mind it were set in the Buddha’s ways. Problem is, it is all too often set in ways that evolved many centuries after the Buddha. This resistance to innovation expresses itself in architecture as much as anything else. Temples are generally built is in traditional styles to the degree that it is possible. Here in Singapore at least one temple has ‘broken the mold’, Poh Ming Tsu, on Bukit Tima Road. The original Poh Ming Tsu was built in 1934 but after the death of its long-standing incumbent, a new young and dynamic lay committee decided, in 2006, to demolish the old temple and build another one that would reflect a more contemporary outlook. The new temple was finished earlier this year. For the last few months, on my way back from the polytechnic where I teach every Wednesday, I pass Poh Ming Tsu and always admire it. Then last week I was invited to speak there, giving me the opportunity to have a really good look at the place. The whole atmosphere of Poh Ming Tsu is what I would call Buddhist minimalist, its surfaces and lines are simple and functional giving the place certain quietness. It has lecture rooms, a beautiful library and a shrine room that invokes stillness and silence as soon as you step into it. Only the uplifting pitched roof hints of traditional Chinese architecture. In keeping with Poh Ming Tsu’s more contemporary form, the new committee is encouraging more Dhamma teaching and less ritual activities invited speakers from all three schools of Buddhism. We need more modern temples and we defiantly need more modern Buddhism. 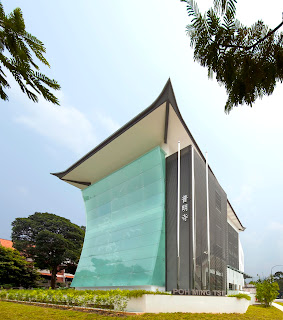 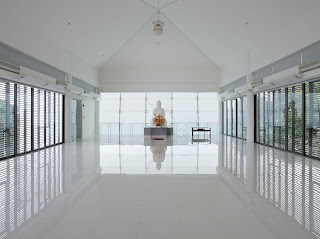 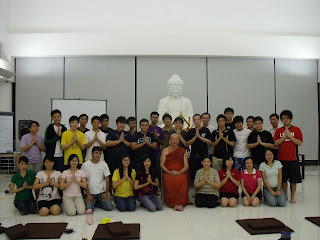 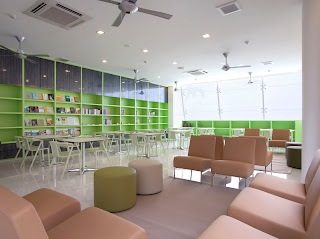 Posted by Shravasti Dhammika at 4:35 PM

Aah.... I would pay a visit to Poh Ming Tsu. From the description, I feel an affinity for the place. Are there any fossilised relics, gigantic buddha, and washrooms with golden faucets?
Is Poh Ming Tsu a temple or just a Dhamma teaching centre?

I like the old architecture and the new as well. There's room for both, don't you think? The Poh Ming Tsu building looks pretty cool I have to say!

Dear Nathan,
I do indeed think there is room for both. We need to honor the old while not getting stuck in it. I love traditional Chinese temples. In fact, sometime next month I hope to blog about the exceptionally fine one just across the freeway from me.

Dear Bhante,
Thanks a million for introducing Poh Ming Tse. It is very near my house but I did not dare to step in as the totally different look of a `Tse' caused me to be suspicious of what goes on inside wondering whether it is some cult. Now I know the activities there are what appeal to me and I will pay a visit asap.

'Tse' is chinese for temple. Actually you are quite right to be 'suspicious' as I always have this 'fear' about going into Chinese temples.