Christianity, or at least mainline Christianity, has changed so much in the last 150 years that it is difficult for most of us to imagine the impact that The Origin of Species had when it was first published. It literally overturned some of the most fundamental principles of t 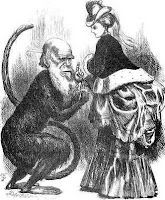 he faith and in the succeeding decades Christianity was compelled to re-adjust and reinterpret its teachings to fit into the new truths of evolution. Those who oppose evolution today are fighting a rearguard action.
Darwin’s book had almost no impact on the Buddhist world. Few Buddhists knew English and could read it and even fewer had any scientific knowledge to be able to appreciate it. When it did become known amongst Buddhists, mainly amongst the English educated elite in Sri Lanka, it has had a curious effect. English speaking Sinhalese were quick to see how they could use evolution in their struggles against Christian missionaries. They began proclaiming that Christianity was at odds with science and this did have some influence on Sinhalese tempted to become Christian because it was perceived to be ‘Western’ and ‘modern’. And secondly it encouraged them to look at their own origin myths. When they did this they discovered, or more accurately, rediscovered, the Agganna Sutta, a text that had traditionally been given very little attention and was certainly completely unknown to the average Buddhist. With relative ease, the Agganna Sutta was interpreted to fit into the findings of evolution and this gave previously desperate Buddhist apologists an enormous boost in confidence.
Have a look at David Attenborough’s fascinating documentary on Darwin, evolution and religion. http://www.youtube.com/watch?v=RwFFTxMjxoM
Posted by Shravasti Dhammika at 12:17 AM

Dear S.Dhammika,
Tried to find Aganna sutta but the search gave no results on Access to insight site. Is the name of the sutta spelled correctly?

Dear ‘Old Chatterbox’
Thanks for alerting me to a spelling mistake. It should be Agganna. My error.

Richard Dawkins has written excellent books and given lectures in these areas. Available at YouTube.

Bikkhu in the religion theory, human being was perceived a like animal but in the reality physic like a ape, and to be human must with the process, but is it usefull if nature order to elected God looking for the best who will be real makhluk