The Advent Of A God

I get the National Geographic every month and always enjoy reading it. Last month’s issue is particularly interesting. One article is about the ancient tea route by which bricks of tea were carried from China to Tibet right up until the 1950s. Even more interesting is the article by Alma Guillermoprieto about religious changes that have been taking place in Mexico in the last 20 years, in particular the coming into being of two new gods. Nearly all the gods worshiped today have been for at least a few thousand years. Although they had a beginning we know very little about it. Contemporary Mexican society is actually allowing us to actually see the advent of a god, or actually at least two gods. Their origin is not lost in time or myth, it is unfolding before our very faces.
The two gods features in the National Geographic are Santa Muerte and Jesus Malverte. It is thought that Santa Muerte now has something like two million devotees while many others worship her 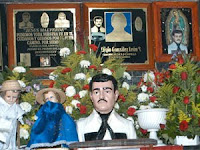 while still attending church. Her cult has now spread to the US and popular devotional songs to her are beginning to be produced. There are also videos on how to worship her and everything else the devotee might need. Despite condemnation of Santa Muerte by the Catholic and other churches and efforts to discourage it by the Mexican authorities her cult continues to grow There are numerous house churches and shrines to Santa Muerte around Mexico and a huge new church in her honor is under construction in Mexico City right now. Another god who has really hit the big time is Jesus Malverde. According to the story, Jesus Malverde was a good-hearted bandit who used to rob from the rich and give to the poor and who was captured and hanged some hundred years ago. So one might think of him as a real person who eventually got deified. The problem is, investigators have yet to come up with any evidence that he ever existed.
Jesus Malverde is popular with drug gangs who want protection and with others want to be rich and powerful like them. And by all accounts Jesus Malverde, like Santa Mu 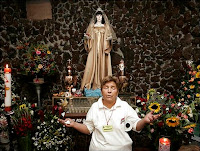 erte, delivers the goods. The numerous shrines to him are plastered with ‘thank you’ letters by devotees who have had their prayers answered and a monthly Santa Muerte magazine with a circulation of about 30,000, includes dozens of testimonies from grateful petitioners. How can non-existent gods answer prayers? Are these devotees lying? Are they deluded? Is it just their imagination? And is there a difference between these people and those who worship older, more popular, more recognized gods and claim that their prayers were answered?
It would be really interesting to come back in 200 years and see if the Jesus Malverte and the Santa Muerte cults have evolved into ‘legitimate’ religions with a priestly hierarchy, sacred text, an ‘official’ theology and an acceptable and ‘respectable’ pedigree. After all, I can think of a few gods of very doubtful origins and individuals who never existed but are now worshipped as gods, and their cults are generally taken seriously.
Posted by Shravasti Dhammika at 1:44 AM

We saw your blog and it was very nice and very inspiring for buddhist people like us. We are affiliated with the Buddhist pilgrimage program in Nepal. We run a trekking agency in kathmandu. but we are now mostly focusing on buddhist pilgrimage in all over the nepal and we would like to ask for your help. We are also increasing the buddhist knowledge in Nepal.

Here is our web address : www.shambhalatrekking.com
you can contact me at: pghale@mail.com.np

Please reply to us so we can work togethere and spread the light of buddhism all over the world.

Coincidentally I bought the National Geographic mag you're writing about today, mainly because of the article on La Santa Muerte, a belief I have an interest in.

I have to correct you though Bhante: La Santa Muerte's worshipers think of her as a saint, not a god ('santa' means 'saint' in Spanish). They still mention God and Jesus in their prayers and invocations to La Santa Muerte.
But then it all equates to the same thing in the end...

Just as an addition: I think the youngest world religion is the Bahai faith, it appeared in the 19th century and teaches a progressive revelation of god; for each epoch a different prophet with an advancing message.

They believe that Buddha was a prophet and that Maitreya has appeared as their current prophet.

Dear Shantivadin,
Quite frankly, the distinctions between a saint and a deity has always been lost on me, as I suspect it is on most Mexcians.
Dear Ben,
You are right in saying Bahai is the youngest world religion, closely followed by Mormonism. Curiously,‘the Bab’had his‘revelation’ just one month(24th May,1844) before Joseph Smith was killed(27th June 1844).It seems to have been a busy month for God. For a Buddhist take on Bahai go to www.buddhismatoz.com and look up‘Bahai’.

I had some discussion with Bahai about these topics and although they preach tolerance in the end they often become unfriendly. They also preach a mythical union of religions, that they all have a common core, but when you talk with them about reincarnation, the denail of an immortal soul or god, a lot of them claim that the Pali-Kanon is just wrong about that. It was orally transmitted for centuries, so there must be mistakes in it and thats why there are contradictions between Buddhism and Bahai. I know that it is ridiculous, but it shows how right the last sentence of your web lexicon is: True tolerance is the acceptance of diversity, not the denying of it.

One more new god, the best god ever! The Flying Spaghetti Monster: http://www.venganza.org/

Dear Bhante,
I agree. I find it hard to understand the whole saint thing too.
Supposedly you pray to a saint to "put in a good word" to God on your behalf, even though God supposedly knows all and sees all and would know about your request as you pray for it (or even before YOU even think of praying for it - that's how amazing God is apparently). So God knows what you need, but wants to hear you pray for it. Through a saint. Something like that.

At the risk of insulting anyone, I think this line from Father Ted (a British comedy series about a couple of Irish Catholic priests) pretty well sums it up for me:

Father Ted: "That's the great thing about Catholicism. It's so vague and no one really knows what it's about."

Annapurna circuit or around Annapurna trekking is one of popular trekking trails in the Annapurna region, where one can see and enjoy with the panoramic scenes of Himalayas, including the Mt. Dhaulagiri 8167m, Mt. Annapurna I (8091m), Mt. Manaslu (8163), Mt. Annapurna II (7937m) , Mt. Annapurna III(7555m), Mt. Annapurna IV (7525m), Mt. Annapurna south (7219m), Mt. Nilgiri (7041m), Mt. Fishtail also called Machhapuchhare (6998m) , Mt. Hiunchuli (6441m), Mt. Lamjung Himal (6986m),Tukuche peak (6920m), Tilicho peak (7134m) among others. Since the Manang was opened for trekkers in 1980s, the trekking in the area has become a centre of attraction for many tourists, as the region is rich in breathtaking scenes. Besides that the tourists can explore the diverse culture and lifestyle of people living in the areas and the flora and faunas lying as a living museum. Furthermore, one can see a blend of culture of different caste and creeds living in the area namely, Bramin, Chhetree, Tibetian sherpa, Thakali, magars, Tamang, Gurung among others.