What Makes A Real Man?

In the blurb on the back of this book Charles Prebish says it is ‘one of the most creative and remarkable manuscripts on an Indian-Buddhist related topics I have read in the past quarter century’. I would agree completely. John Powers’ A Bull of a Man, Harvard University Press 2009, is an in-depth study of masculinity, male sexuality and the male body in Indian Buddhism, from the Pali Tipitaka, Sanskrit Hinayana texts, Mahayana texts and in Vajrayana literature. It makes fascinating, and at times rather disconcerting reading. 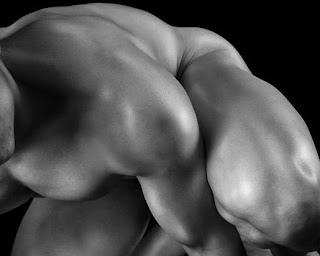 No matter how seemingly bizarre an ancient (or contemporary) people's idea of beauty and/or masculinity might be, I just can't understand how a tongue that can lick the back of the head could ever be considered attractive!
Ah, vive la différence!

Miranda Shaw has published a book called Passionate Enlightenment in which she gives an explanation of tantras from a feminine viewpoint, which is grounded in the tradition, the book was chosen as a buddhist book of the year by Tricycle Magazine, what Powers says maybe true, i.e. he has not read or heard anything of the kind that Miranda Shaw presents.
The famous chinese yogi C.M. Chen has told of a sutra called Buddha Penis Sutra that exists in chinese Tripitaka, in it Buddha has a Who's penis is bigger? -competition with Shiva, which the Buddha naturally wins. Unfortunately Yogi Chen's "disciple" mr Yutanling has "edited" C.M.Chen's books, after which there is no mention of this highly interesting sutra!

There is in fact a ‘Buddha’s penis’ sutra in the Chinese Tipitaka, a translation from the original Sanskrit. However it has not been translation into English and I have never read it. But from what I know of it, it is an attempt to counter the growing influence of Sivite Hinduism and as Yogi Chen correctly says, includes a penis competition with Siva who is, I’m sure you know,is often symbolized as a lingum. Whether or not this is composed in a ‘tongue in cheek’ tone or not I cannot say. Either way, it sounds like a pretty bizarre piece of literature. As with so much Buddhist literature, the further you get away from the Buddha the more unrealistic (and in this case, the more embarrassing) it becomes.

men is the name of power hard , strong and brave heart men like world strongest machine maximizer oil in islamabad its
health and fitness in his mind and heart ,,,/