One's As Good As Another

IN the very unlikely event of us ever feeling the need to worship a god, we could do a lot worse than choosing the Nordic deity, Thor. Unlike the bad-tempered, psychotic old god worshipped by some, Thor – for all his antics with his mighty, magic hammer, Mjolnir – seems to have been an amiable sort of fella, who would never dream of visiting floods or pestilence upon innocent folk. 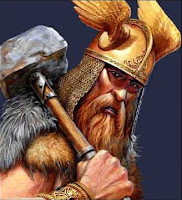 What’s more, he is so often portrayed as virile young hunk, not a grumpy, dysfunctional old git. Nevertheless, we can understand why the authorities at the Utah Department of Corrections might be a tad nervous about allowing Michael Polk to worship Thor while in prison. Polk is suing the Utah Department of Corrections for denying him his right to have religious items he claims are necessary for him to practice the ancient Nordic religion of Asatru while behind bars. The religion worships ancient Nordic gods like Odin, Thor, Tyr and Heimdal According to World Wide Religious News, Polk, who is serving time for aggravated assault and robbery, said in his federal court lawsuit that he has been a member of the Asatru faith since 2005 – and to properly practice it he needs items including a Thor hammer, a prayer cloth, a mead horn used for drinking wassail, a drum made of wood and boar skin, a rune staff and a sword. Hmmm, a hammer and a sword in the hands of an wassail-soaked prison inmate with violent tendencies …. We await the outcome of this case with considerable interest. From www.freethinker.co.uk/2007/12/27/455/
Posted by Shravasti Dhammika at 7:53 PM

What a hoot! and in Utah, no less. Thanks for the chuckle on an overcast day.

Even though I'm an atheist I carry a Thor's Hammer amulet on my car keys!
An invocation to the Thunder-God never hurts when my car won't start!