The Dalai Lama is such an inspiring man. He has probably done more to raise the profile of Buddhism among the wider population in present it in a positive way than any other person. Having said than though, one would also have to say that in his efforts to be agreeable he sometimes says some pretty stupid things. Perhaps he tries a little too hard to be liked and to please his audience. So the other day when someone sent me an article by him called Many Faiths, One Truth published in the New York Times, my heart sunk. “Oh no!” I thought “He’s going to give us the old ‘all religions are the same’ nonsense.’ As a 20 second ‘sound bite’ statements like ‘All religions are the same’ are okay. They tell the listener that you’re 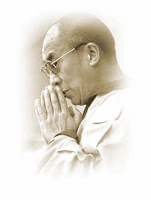 the open, accepting type and that the proceeding discussion is going to focus on commonalities and studiously avoid differences. As a statement of fact they bear no relation to reality at all. It’s a struggle just to get some agreement between different sects of the same religion, let alone between different religions. People who believe that all religions share a common vision of reality are always bemoaning religious divisions. While constantly beseeching ‘Why these divisions? Why can’t we be one?” the most obvious answer to these pleas – that religions see things very differently - never seems to occur to them. I have always suspected that the “all religions are the same’ crowd are actually less open and accepting that the “most religions are different” bunch. To me, real tolerance is knowing the differing or opposing viewpoint and accepting it as such. If you can only ‘stand’ the other guy because you have been able to convince yourself that he actually agrees with you about everything, you have a pretty weak tolerance.
Anyway, when I read the Dalai Lama’s article I was relieved that despite its name he was not advocating the ‘all religions are the same’ position but rather arguing for a focus on finding meeting points and using them as bridges between different faiths. Of course, this is hardly a new idea but the Dalai Lama does put it across with sincerity and eloquence. And it might be worth pointing out that long before this approach became popular the Buddha advocated it too. In the Digha Nikaya I,164 he says, “Those things about which there is no agreement, let us put aside. Those things about which there is agreement let the wise bring up, discuss and examine”.
You can read the Dalai Lama’s article at
http://www.nytimes.com/2010/05/25/opinion/25gyatso.html?scp=5&sq=dalai%20lama&st=cse
Posted by Shravasti Dhammika at 4:53 PM

Dear the most Venerable Shravasti Dhammika,

You are such an inspiring man. I am very respect and thanks to your effort in explaining the Dhamma to every one. I have received your books yesterday. I would like to make some donation. Therefore, I would like to ask may I send you donation in the form of money order from where I live now? Please let me know. Thanks and may you be happy and peace always.

Best regard from Sumedh