Solitude or withdrawal (patisallana, pavivaka, viveka or vupakasa) is the state of being secluded or separate from others. A person can choose to be solitary or be forced into it by others or by circumstances. When solitude is unwanted it can result in loneliness, anxiety or fear. When used at the right time and in the right manner it can have an important role in spiritual development. After his baptism Jesus is said to have spent 40 days and nights alone in the desert. Tradition says the young Muhammad had the habit of meditating alone for several weeks every year in a cave on Mt. Hira.
Before his enlightenment the Buddha too spent extended periods alone in the forests. Reminiscing on this time many years later he said: ‘Such was my seclusion that I would plunge into some forest and live there. If I saw a cowherd, shepherd, grass-cutter, wood-gatherer or forester, I would flee so that they would not see me or me them.’ (M.I,79). Even after attaining enlightenment he would occasionally go into solitude. In the Samyutta Nikaya he is recorded as saying: ‘I wish to go into solitude for half a month. No one is to come to see me except the one who brings my food.’ (S.V,12). 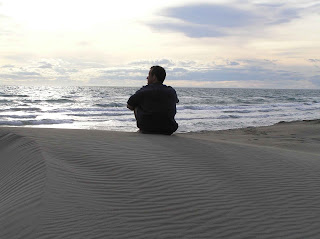 The Buddha made a distinction between physical and psychological solitude and considered the first to be the more important (S.II,282; V,67). For him, psychological solitude meant isolating the mind from negitive thoughts and emotions. The Buddha recognized that people can choose to be solitary for a variety of reasons, some positive, others less so. Some wish to isolate themselves from others, he said, out of foolishness or confusion, for some evil purpose, because they are mad or mentally unstable, or simply because he praised it. More intelligent reasons why one might seek solitude, he said, included because one’s wants are modest (appicchatam), for contentment (santutthim), so as to examine oneself (sallekhm), out of an appreciation for aloneness (pavivekam) and because it can be helpful for spiritual growth (atthitam, A.III,219). It is certainly true that regular periods of solitude and even occasional extended periods, can be psychologically refreshing. It can teach one independence, rest the mind, enhance an appreciation of silence and it give one the opportunity to have a good look at oneself. As the Buddha said: ‘Monks, apply yourself to solitude. One who does so will see things as they are.’ (S.III15).
However, even if one seeks prolonged solitude for the right reasons one still needs to monitor oneself carefully and intelligently. The joy of aloneness (pavivekasukka, A.IV,341) can subtly deteriate into a shirking of one’s responsibilities. Likewise one can overdo it, over-reach oneself and end up straining the mind. Hence the Buddha’s caution: ‘One who goes into solitude will either sink to the bottom or rise to the top.’ (A.V,202).
Posted by Shravasti Dhammika at 1:07 AM

Thank you. It was good to come across this the day before starting a retreat.

I had translated ur article 'the stupid and the decent' yesterday n I had published it too into my blog. n I would like to have your permision to translate this article into Bahasa. Thank u Bhante, may all of being live happily ^__^ _/\_

Dear Selfy Parkit,
From now on dont ask, just translate and then let me know when you have put it on your blog.