Dreams (supina) are mental images that occur during sleep. There is widespread belief that dreams have some significance. Some people believe they foretell the future, others that the dead can communicate with the living through them. Modern psychoanalysts say that when interpreted correctly, dreams can offer an insight into suppressed desires and drives and thus can lead to a deeper self-understanding. Buddhist psychology recognizes several types of dreams. According to the Milindapanha these are (1) dreams caused by physical stress, (2) by psychological irritability, (3) by spirits, (4) because of mental clarity and (5) prophetic dreams (Mil.II,298). It also says that dreams mainly occur in the interval either between falling asleep or waking up (okkante middhe) and deep sleep (asampatte bhavnge, Mil.II,299), a fact confirmed by science.
Before the Buddha was enlightened, he had seven dreams full of strange symbolism w 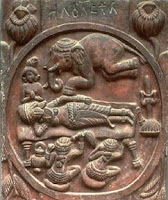 hich did in fact foretell his enlightenment (A.III,240). However, he was sceptical of those who claimed that they could interpret other people's dreams and he forbade monks and nuns from doing so (D.I,8). He said that a person who does loving kindness meditation (metta bhavana) will not be disturbed by nightmares (A.V,342) and also that a monk who falls to sleep mindfully will not have a wet dream (A.III,251). The Buddha also said that dreaming of doing something, i.e. killing someone or stealing something, is not ethically significant and therefore has no kammic effect (Vin.III,111). Thus he understood that dreams are beyond the power of the will. Legend says Maha Maya, Prince Siddhattha’s mother, had a dream dreamed of a white elephant soon after he was conceived and that this was a portent of his future greatness. The story is not in the Tipitaka and the earliest version of it is found in the Jatakanidana 50.
The best attempt I know of in any medium to depict a dream is Salavador Dali’s dream sequences from Hitchcock’s Spellbound and Bunuel’s Un Chien Andalou. If you have never seen this second clip, be warned, it’s pretty startling, or you might say ‘nightmarish’.
http://www.youtube.com/watch?v=dzxlbgPkxHE&feature=related
The picture shows the oldest representation of Maha Maya’s dream from the Bharhut Stupa 2nd century BCE
Posted by Shravasti Dhammika at 3:09 AM

help me .... i want to ask you about a very unimaginable dreams , i saw other day , it was about monk , monk temple and me . After that i forgot abt that but it is still in my heart . Kindly tell me how can i write you abt that . I will be grateful if you will help me to see things a little clear

The Roman general Scipio Africanus (235–183 BC), known for defeating Hannibal at the final battle of the Second Punic War at Zama, was one of the finest commanders in military history.
He was a spiritual man as well as a soldier and statesman, and was a priest of Mars.
Due to his achievements (both military and political), he was supposed to have been possessed of "second sight", and was supposed to have had prescient dreams in which he saw the future.
Livy describes this belief as it was perceived then, without offering his opinion as to its veracity. Polybius made a case that Scipio's successes resulted from good planning, rational thinking and intelligence, which he said was a higher sign of the Gods favour than prophetic dreams. Polybius said people had only suggested Scipio had supernatural powers as they had not appreciated the natural mental gifts which facilitated Scipio's achievements.

The same could be said of the Buddha. He was an amazing man and teacher, but to give him supernatural powers, like prescient dreams, in my opinion, is unnecessary, and may even take value away from his actual teachings.

Dreams have been looked at in the scientific light. There's no better place I can think of, where I can find dreams taken in the light of the Tipitaka, and thoroughly for that matter.