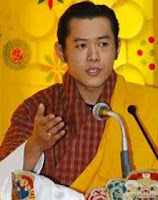 Perhaps it's true that good things do come in pairs. First Obama and now this. Yesterday, the 6th of November, Jigme Khesar Namgyel Wangchuck was crowned king of Bhutan, becoming the world's youngest head of state (he is 28) and the second of only two Buddhist kings left in the world. His father, who abdicated in favor of his son two years ago, had been a forward-looking and enlightened ruler who voluntarily renounced his absolute power to introduce parliamentary into his country. How often does that happen?!! Generally, politics (and quite a few other things) in Buddhist lands offers little worthy of emulation but at least in this area Bhutan has become a model for developing countries. Even some developed countries could learn a thing or two from them. Given this auspicious event, instead of continuing with our look at meditation tomorrow, I will share with you some of the photos I took in Bhutan, that lovely land with its gentle shy people.
In the meantime, have a look at these images of the coronation in Thimphu.
http://images.google.com/imgres?imgurl=http://newsimg.bbc.co.uk/media/images/45179000/jpg/_45179033_bhutan466afp3.jpg&imgrefurl=http://news.bbc.co.uk/2/hi/in_pictures/7712451.stm&h=300&w=466&sz=43&hl=en&start=1&usg=__6Jk49dg43WfQpEv11pRJ9a5Oraw=&tbnid=ZRyA-kxnM_2bbM:&tbnh=82&tbnw=128&prev=/images%3Fq%3Dcoronation%2Bin%2Bbhutan%26gbv%3D2%26hl%3Den%26sa%3DG
Posted by Shravasti Dhammika at 11:03 PM