Well, he won. Of course it is by no means the first time someone from a disadvantaged minority or from beyond the mainstream has won the confidence of the majority.

The British voted for a Jewish prime minister in 1868.

The Australians voted for a Theosophist prime minister in 1901.

The UN General Assembly voted for a gay Secretary General in 1953.

The Indians voted for a communist chief minister in 1957.

The Sri Lankans voted for a female prime minister in 1960.

Muslim Turkey voted for a female prime minister in 1993.

Indian parliament voted for an untouchable president in 1997.

The Americans voted for an intellectually challenged president in 2001. 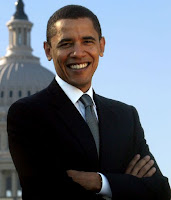 Nevertheless, he has overcome the considerable odds of race, age and lack of experience to become the most powerful and influential leader in the world. It says much for him and also for the American electorate. He has promised much and much is expected of him. May he guide that great nation with wisdom and kindness, prudence and good judgment.
Posted by Shravasti Dhammika at 11:08 PM

"The Americans voted for an intellectually challenged president in 2001."

You are politically correct to use that term.

But I would use another term making me not befitting a Dhamma teacher! Hahahahahaha!

He may have been the first minority president but his utter lack of experience and his disturbing associations(Rev. Wright, Bill Ayers, former PLO terrorist spokespeople) speak volumes about his character as far as I'm concerned. I think America was too eager for a minority candidate and they rushed to get it done not really thinking about what this guy brings to the table. Either that or I'm way too conservative and out of touch! 20 years at a racist church and associations with domestic terrorists who teach marxist education theory decades after bombing the Pentagon is just too much for me but i guess we are all entitled to our opinions. I just don't like him and hopefully he can change that for me by leading rightly.

To dhamma81,
You certainly have the right to your concerns about Obama. But I want to set the record straight on one point for our out-of-U.S. friends.
We didn't vote for him in a rush to elect an African-American President. He's no token.
Democrats who voted for (white)others in the primaries voted for the Democrat in the General Election (as Democrats are wont to do), Many Republicans voted for the Democrat since they either didn't think McCain had what it takes to lead during an Economic Maelstrom, to punish the Republicans for the last eight years or they were floored (negatively) by the Palin pick.
I hope he surprises you.

Minority or not, Marxist or not, Democrat, Republican or Calathumpian, my wish was 'May he guide that great nation with…etc'. I think all persons of goodwill will wish the same thing.

Many more Americans voted (or tried to vote) for him than the tallies show. US elections are flawed and corrupt, but still he won. We voted for Obama not only because he is black, but also because he is intelligent, calm, deliberate, articulate, principled, educated, determined, energetic, and youthful.

We voted against illegal wars, against torture, against racism, against guilt by association, for a restoration of habeas corpus, for tolerance, for a separation of religion and state, for health care, for a fairer economy, for the environment.

We have some reason for hope. Actually, perhaps that was the main motive -- a vote for hope.

Thank you for your good wishes. May the new president be wise.

Well at least we can be respectful around here. That is always a good thing. I thought I'd be attacked for my conservative views.

My practice affords me the opportunity to see that my views are as impermanent, not self and inherently dissatisfying as anything else in samsara.
I still exercise my privilege to vote and have political views for sure. But I'm trying to eliminate the clinging to them, which for me can get me really really angry or frustrated when dealing with people of different political beliefs.
Especially the not-self aspect. If political views are just aspects of Mind (which isn't MY SELF) than they aren't the other person's self either. Why, then, should I aim the anger at the individual him/herself.