Some weeks ago I was having a discussion with a woman who had come to see me concerning the Buddhist position on abortion. She was doing a project on this subject for her church. After answering her questions as best I could (she was surprised that Buddhism had a ‘position’ on the subject similar to her own) we talked in general about our respective religions and made comparisons. At one point she told me that in her opinion, Buddhists worshiped devils. I asked her to give me an example of this and she said, ‘Well, look at all those multi-headed and animal-headed idols with six alms, holding swords and all that.’ I didn’t think it worthwhile to correct her. I long ago found that it is impossible to convince someone of something that they don’t want to be convinced of. And besides, she said this in a tone of pity rather than horror and disgust so I thought it kinder to leave her in her ignorance. But it is an interesting position that could well raise several questions. ‘Why do you associate animal features or multiple limbs with evil?’ ‘Is it not possible that these "idols" are only symbols, as when Jesus is represented by a fish or a lamb?’ And of course I could also have quoted some of the many passages in the Bible where God is described as looking uncannily similar to Hindu ‘idols’; e.g. Numbers 11,1; Isaiah 27,1; Zechariah 9,14; Job 23,15. And what about Psalms 18, 7 and 8?
But this set me thinking about the similarities in religions when it comes to m

ythology, symbolism and imagery. Take holy beings with animal features. A very popular Christian saint used to be St Christopher Cynocephalus who is always depicted with a dog’s head. The reason for this is a fascinating one but you’ll have to look it up for yourself. Of course there are no Theravadin or Mahayanist bodhisattvas or Buddhas with animal features, despite my Christian visitor’s opinion to the contrary.
And what about the multi-headed thing? My inquirer was probably unaware that her god often used to be depicted with three faces which looks no less strange than the four-faced Shiva or Brahma. The th 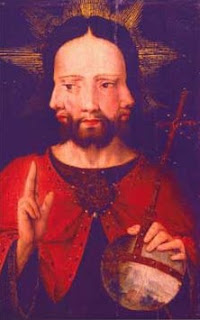 ree-faced God was how medieval artists attempted to represent the Trinity. Then take the guardians of the four directions (catummakarajika deva). According to Buddhist cosmology, each of the four cardinal directions are presided over by a god or spirit; Kuvera in the north, Virulaka in the south, Dhatarattha in the east and Virupakha in the west (D.II,209). The gates of ancient Indian Buddhist temples and monasteries always had images or paintings of these gods on them, a custom that continues in China and Tibet. Beyond this, these deities have no doctrinal significant in Buddhism. Now in the Book of Revelation from the Bible (a veritable treasure house of rich symbolism) it mentions ‘four angles standing at the four corners of the earth, holding back the four winds of the earth to prevent any wind from blowing on the land or on the sea or on any tree’ (Rev.7,1). The only difference between this and the Buddhist myth is that the

early Christians thought the earth was rectangular whereas the Buddhists knew it to be round or spherical. In the corners of European world maps until well into the 18th century these angles were commonly depicted, usually blowing air across the landscape. I would have to admit that Buddhism has no equivalent to the Bible’s seven angles with their trumpets (Rev.8,6), Michael fighting the dragon (Rev.12,7) or Jesus with eyes like blazing fires, a sword coming out of his mouth and dressed in a robe dripping with blood (Rev.19,11-15), but this is no less strange that the 32 Signs of a Great Man. One person’s symbols are another person’s devils.
Posted by Shravasti Dhammika at 1:05 AM

As always a very well written piece, though I am rather sorry you didn't try to explain some of this to the lady in question at the time...

You mention that "The gates of ancient Indian Buddhist temples and monasteries always had images or paintings of the (Four Great Kings) on them."

Do any of these still exist, and do you know where I could find photographs of them as we are intending to add the iconography to our temple, but want them made in the ancient Indian style.

Dear Bodhi,
Almost every Tibetan temple has paintings of the directional guardians and so do many Chinese temples. The Chinese temple just down the road from me has four very impressive ones. I post a picture of Kuvera, king of the north (note his mongoose), from the new (and incredibly lavish) Kagyu temple at Bodh Gaya which I took last year.

"Of course there are no Theravadin or Mahayanist bodhisattvas or Buddhas with animal features, despite my Christian visitor’s opinion to the contrary."

Dear Bhante, in Japanese Mahayana Buddhism, their is the bodhisatta called 'bato kannon'馬頭観音 or 'Hayagriva' in other places. 'Bato kannon' literally means 'Horse-head Quan Yin'. This manifestation of Avolakitesvara is often depicted with the head of a horse and is the protector of animals. Whilst Hayagriva is clearly the Buddhification of a Hindu deity, there are in fact Mahayanist bodhisattvas with animal features.