It had to happen I suppose. The thumb drive on which I have written all my posts has gone funny and until I unfunny it you are going to have to wait for more Dhamma Musings.
In the meantime have a look at this. This picture really has nothing to do with the Dhamma but I liked it so much I just had to share it with you. Contrary to common opinion, not the South American Anaconda but the Indian Python, Python molurus is the world’s biggest snake. In Pali they were known as ajjakara, literally ‘goat-eater’ and some are in 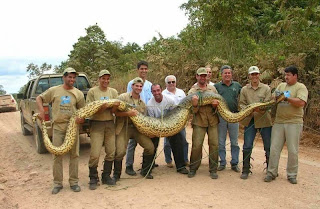 deed big enough to swallow goats, calves, dogs and small deer. In the Jataka it says ‘pythons are not poisonous but they are very strong. They wrap their coils around any human or animal who comes near them and crush them’ (Ja.VI,507). Last time I visited the Lucknow Zoo (known in the animal world as ‘the Belsen of the East’) they had one that was absolutely enormous. The men in this picture look Latino so I assume the snake they are holding is not an Indian Python. Nonetheless, it’s a very impressive reptile.
Posted by Shravasti Dhammika at 3:00 AM

The snake in the pic is an anaconda. The Indian rock python is not the biggest/ longest snake. The reticulated python is from S E asia and the Nicobar islands and N E India.

Hi Shravasti Dhammika, peace and serenity to you.
Sorry if i write a comment while i'd like to write you an email, but i didn't found your address. I arrived to your blog from the What_Buddha_Said group, where I founded the dhammawiki url.

Reading there the voice Astrology, I founded your url.
I am Italian (so please sorry for my bad english) and buddhist of the Mahajana tradition, I do astrology. I'd like to write just a simply note. The fact that Pluto was discovered only in the 1930, dosn't means that we was not able to make predictions or that all predictions where incorrect. The astrology can say what more or less will happend in a certain moment, whit the tools that are aviable at the moment of the prediction. If we wish to talk about Pluto, It has meaning just for the prevision that touch a large range of years, it is called a generational planet, because it takes about 150 years for cross al the Zodiaco. Now that we know where it is, simply we can be more precise. I suppose that the people went to hospitals even 30 years ago, when a lots of diseases where jet unknow. Sorry for disturb you.
I will back to read your interesting blog.

To avoid corruption to the data in the thumb drive, it is advisable to do a software eject for the thumb drive before physically removing it. You can see the steps here:

Recovering a thumb drive unfortunately is not that easy or straightforward.

Dear Ryan,
Thanks for the comments. My Book of Indian Reptiles and Amphibians says of the Indian Python that 'its girth and length considerably exceeds that of all other snakes, except its own close allies.' Its closest ally is of course the Reticulated Python which is, according to the same source 'One of the longest snakes in existence' not the longest mind you. These quotes seem to me to be giving a mixed message.
Thank you also for the beautiful photos and equally beautiful prose on your blog. I was particularly interested in your post on the Aghoris and on the death of Veerappan. Your other one on Beautiful Eyes is very moving.