It’s a long but pleasant drive from Alor Star, capital of Malaysia’s northernmost state, through lush green jungle and small villages. Eventually you start climbing and enter the Bujang Valley with its v

erdant peaks on either side. The ruins in the valley cover an area of about 220 square km and consist of about 50 temples (candi) stupas and other structures, the most important of which have been dismantled and reconstructed around the museum. The museum itself contains a small but very well-presented collection of artifacts. The whole site dates back about 1500 years to the time when Buddhism and Hinduism were the main religions in what is now Malaysia. Considering that the earliest examples of writing from Malaysia are Bud 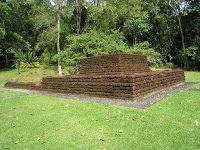 dhist, as is the earliest plastic art and the first architectural structures of any significance, Bujang Valley’s antiquities are little known to the average Malaysian. Official bodies in Malaysia are very reticent about mentioning country’s pre-Islamic heritage. There have long been claims that Buddhist and Hindu antiquities are hidden away in museum cellars or even destroyed. In the 1930’s Dr. Quaritch Wales investigated some 30 sites round about Kedah and wrote up his findings in the Journal of Malayan Branch of the Royal Asiatic Society. A rectangular stone slab with the famous Buddhist Ye dhamma hetu… formula in South Indian characters from the 4th century CE was found in a temple (site I) of which only the basement survives. Another inscription in Sanskrit dated 1086 CE has also been found. Quaritch-Wales’ material still makes interesting reading but little has been published on the discoveries made since then.

It seems the area south of the Bujang Valley was the capital of Kadaram, ancient Kedah, which was founded around 300 CE. The mouth and lower reaches of the Merbok River were a major port until they silted up. The famous Chinese pilgrim Fa-hien stopped here on his return journey from India. All the evidence shows that Buddhism along with other aspects of Indian culture was introduced to Kedah from South India, probably originally by traders and wandering monks.
Note: The accompanying photos are not mine but were taken by Ven. Anandajoti during his recent trip to Bujang Valley and used with his kind consent. 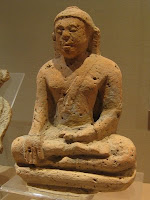 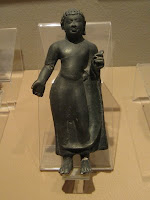 To see the photographs at a bigger size please visit http://picasaweb.google.co.uk/anandajoti/BujangValleyMuseum They are high resolution (3264x2448) and can also be downloaded from there.

According to information in the museum the settlement is divided into two main phases: Phase 1 dates from 5th - 9th century CE, and Phase 2 from 9th - 14th century CE, and was part of the Srivijaya empire that sprawled across Sumatra, Java, Malaysia, Thailand and Cambodia from around the 7th century CE

"Official bodies in Malaysia are very reticent about mentioning country’s pre-Islamic heritage. There have long been claims that Buddhist and Hindu antiquities are hidden away in museum cellars or even destroyed."

For people interested in following up on the ancient history of Malaya, the following website has a lot of interesting information: http://www.sabrizain.org/malaya/

the first picture reminds me of a padmapani amulet excavated in the philippines.

this padmapani amulet is one of the very few buddhist artifacts from the pre-Spanish colonial period that has been discovered in the Philippines.

it would be interesting to know if this artifact is similar to those found in malaysia.

(i have a picture of that amulet. anyone interested to see it can just ask me.)

Your Blog on Buddhism is inspiring.