To the viewers one of the most surprising revelations of the NRK program probably was the extent of scholarly involvement there is in the trade. The point was made that when scholars and academic institutions enter into different forms of collaboration with collectors, and start to research and publish unprovenanced objects, in effect, they legitimize them. Therefore the program questioned why respectable scholars, such as Jens Braarvig, Mark Geller, Dan Levene, Shaul Shaked and others, would publish objects in the Schøyen collection despite their questionable origin.
One of the most interesting parts of the program dealt with how Buddhist manuscripts came into vogue among the collectors, and it was implied that in this respect too scholars had become pawns in the games of the market-makers. The investigators managed to interview a London-based smuggler, who said that when the manuscripts started to come on to the market in 1993 and 1994, there was hardly any demand for them. The situation changed when 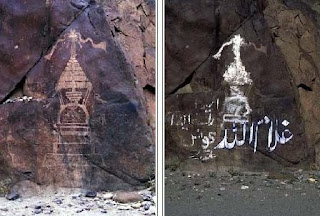 Although you mention it at the end I don't think you have made it clear that the report over the past two days is not written by you, and perhaps does not represent your own opinion. The original report can be seen here: http://www.mcdonald.cam.ac.uk/projects/iarc/culturewithoutcontext/issue16/lunden.htm

Although there are definite moral issues involved and the unregulated trade in antiquities is morally repugnant and can even be damaging to the interest of further research, nevertheless when faced with the ongoing destructive forces in Islam something has to be done to protect our history and culture.

At the end you write, surprisingly mildly: "... Both [Pakistan and Afghanistan] have consistently shown themselves unable and even uninterested in preserving their pre-Islamic heritage." The reality is that the Taliban have shown themselves very willing to destroy every vestige of what they see as paganism, and every effort must be made to preserve the antiquities from their zeal.

"As unscrupulous as they can be, without dealers and buyers all these manuscripts would have been used to boil water for tea."

Hate to say it, but I have to totally agree with you on this. Let the Nagas have it until the people are ready (if they ever will be) !