Gone To That Great Bank Vault In The Sky

The Rev. Ike, the flamboyant Christian minister who preached the blessings of material prosperity to huge congregations, died July 28th in Los Angeles aged 74. ‘Close your eyes and see green’, Reverend Ike would tell his 5,000 parishioners from a red-carpeted stage at the former Loew’s Theater on 175th Street in Washington Heights, New York, the headquarters of his United Church Science of Living Institute. ‘Money up to your armpits, a roomful of money and there you are, just tossing around in it like a swimming pool’. His theology held that the Bible was wrong; that the root of all evil is not the love of money, but rather the lack of it. It was a message that millions liked to hear, it legitimatized their greed and gave it a spiritual slant. One person who certainly benefited from this theology was Reverend Ike himself. Along with Jim Bakker, Jimmy Swaggart and Pat Robertson, he was one of the first evangelists to grasp the power of television and to financially benefit from it. At the height of his success, he reached an audience estimated at 2.5 million. In return for spiritual inspiration, he requested ca 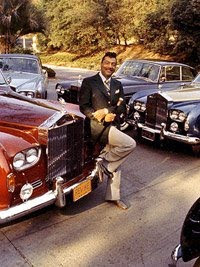 sh donations from his parishioners, from his television and radio audiences, and from the recipients of his extensive mailing list - preferably in paper currency, not coins. ‘Change makes your minister nervous in the service’, he would joke to his congregation. They laughed and happily handed over their money. His critics saw the donations as the whole point of Rev. Ike’s ministry, calling him a fraud and a conman. Whether legitimately or not, the money flooded in, making him a multimillionaire and enabling him to flaunt sumptuous clothes, ostentatious jewelry, luxurious residences and exotic automobiles. ‘My garages runneth over’, he boasted. Frederick Joseph Eikerenkoetter was born in 1935, the son of a Baptist minister. At 14 he became assistant pastor for his father’s congregation, and after high school, he attended the American Bible College in Chicago, receiving a bachelor’s degree in theology in 1956. Later he founded the United Church of Jesus Christ for All People. Finding the traditional Christian message constricting, he moved to Boston in 1964 to start the Miracle Temple and to practice faith-healing, which “was the big thing at the time,” he said, “and I was just about the best in Boston, snatching people out of wheelchairs and off their crutches, pouring some oil over them while I commanded them to walk or see or hear.” Two years later, still dissatisfied, he moved to New York City, setting up business in an old Harlem movie theater, and shorten his name to ‘Rev. Ike’. There he tinkered with his act, polishing his patter, introducing radio broadcasts and taking his show on the road. He began to refine his message to attract a more striving, stable, middle-class audience, people who wanted to hear that their hard work should be rewarded with money here and now. In 1969, he paid more than half a million dollars for the old Loew’s 175th Street movie theater and made it his headquarters, calling it the Palace Cathedral. David W. Dunlap, a reporter for The New York Times, described the former theater as ‘Byzantine-Romanesque-Indo-Hindu-Sino-Moorish-Persian-Eclectic-Rococo-Deco style’.
By the mid-1970s, Reverend Ike was touring the country and preaching on over 1,770 radio stations. Television stations in New York, Chicago, Atlanta, San Francisco, Los Angeles and other major markets were telecasting his videotaped sermons. A magazine he founded, Action!, reached more than a million readers. Because of his emphasis on material wealth, Reverend Ike alienated many traditional Christian ministers as well as leaders of the civil rights movement, who believed black churches should further social reform rather than get-rich-quick theology. His huge income also provoked suspicion. Detractors accused him of preying on the poor, and the Internal Revenue Service and Postal Service investigated his businesses. Reverend Ike could be an electric preacher, whether at the old theater or on the road, appearing before standing-room-only audiences. And he could make his congregations laugh, drawing on the Bible to drive home his message about the virtues of material rewards. ‘If it’s that difficult for a rich man to get into heaven’, he would often say, citing the Bible, ‘think how terrible it must be for a poor man to get in. He doesn’t even have a bribe for the gatekeeper’. Reverend Ike would be well placed to pay a bribe to get into heaven if it was required. He died a multimillionaire.
Adopted from the internet.
You can see one of Reverend Ike’s sermons about how to love God and money at the same time at
http://www.youtube.com/watch?v=iMNM4a7XsaY
Not believing in a deity, I’m just going to rub the Buddha’s belly to get my filthy lucre

I always learn something when I stop by your blog, Venerable. Thanks for an interesting read and the giggle there at the end. ^_^

No no, I have seen Big Buddha, not Big Dhamma.