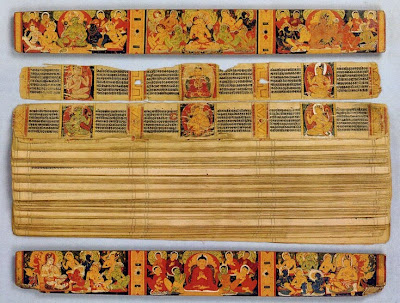 This is a picture of a beautiful and extremely rare ancient Indian Buddhist manuscript dating from about the 11th century. The text is written in ink rather than scratched onto the leaves, and the two wooden covers are exquisitely illuminated. The two holes in the covers and each page were for cords which originally held the pages together and bound them to the cover. The monasteries of India once held many thousands of these beautiful objects although all but a few hundred were destroyed during the Islamic invasion of India in the 13th century. Some of them, like this one, were carried to Tibet by refugee monks where a combination of pious care and dry climate preserved them, sometimes almost perfectly. Of these, a good number were ripped up and burned by the Red Guards during the so-called Cultural Revolution. The fragile few that remain show us how the Buddha’s precious Dhamma was transmitted through time so as to be available to us today.
Posted by Shravasti Dhammika at 12:59 AM

Where can we find such manuscripts and are they available for public viewing? In addition, are there historical resources available online?

What is beauty? In the eyes of the beholders? Many beautiful works and objects have been destroyed by bigoted religious fanatics, political ideologic idiots, righteous chauvinists who saw such works/objects as dirty, corrupt, blasphemous, profanity,or just plain unsightly!

I've been reading your paper Broken Buddha lately. It has made me question deeply what we in the West, and East for that matter, need to think about the path or framework within which to practice the Buddha Dharma. Thanks for writing it. Best, Ben

Dear Dchongkit,
Copies of Buddhist illuminated can be seen in several museums around the world (sorry I cant name any) and in private collections. I have been reliably informed that those not destroyed in Tibet were taken to China where they now housed in several libraries and only available to Chinese scholars. Again, I don’t know of any on-line access to such manuscripts.
Dear Benmoretti,
You will notice that in my Broken Buddha I express no problems with the Buddha’s teachings. My problem is with how those precious teachings have been interpretated, practiced, distorted and misunderstood. As I always say, take refuge Three Jewels, not in Burmese, Thai, Tibetan or Japanese ‘Buddhism’.

Yes that emphasis came through very clearly - it is not the Buddha's teachings that are in question! A group of us too feel the same way, we are from Tibetan, Zen and Theravada backgrounds but have similar issues with each of our traditions. Sectarianism is something that we all have seen in Buddhism unfortunately and want to avoid that! We've set up a meditation and discussion group to see what comes out of it all.

Here's our blog site http://diydharma.blogspot.com/ You can also contact us at diydharma@gmail.com

I personally have seen the Theravada dogmatism you wrote about in BB in the Thai Forest Tradition group that is here. This I found very disappointing as my Catholic upbringing was replete with such uncompassionate dogmatism

In Broken Buddha you spoke about the positive, compassionate and socially inclusive teachings the Buddha gave us that were redacted out of the Theravada canon. Do you have links to where we could find these? In particular the "positive version" of Dependent Origination would be really nice to read.