One year after opening, and about two years after construction began, the Poh Ern Shih Temple (or Temple of Thanksgiving in English) is looking great. I'm dropping by to visit the temple and check out progress on this green Buddhist sanctuary. The place is bustling with activity, and thankfully the first phase of construction has now been completed. On the day of my visit, several different religious study groups are in session upstairs, catering to the younger members of the Buddhist congregation. I locate Boon, the temple president, just before lunch and we sit down for a chat. " 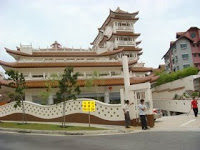 The building performance has been great," he tells me. "We've generated 15 megawatts of power from our first phase PV systems so far in the first year, and we're going to install another set in our second phase of construction." The temple is trialing several different PV systems on their building. So far, they've found the Amorphous Cell system is the best at producing energy so far under the hot Singapore sun as it is often shaded by some cloud cover. The Amorphous Cells are capable of harnessing the spectrum that penetrates this cover. It might not have the highest output on sunny days, but the system has proven its claim to fame. This means that even on stormy or cloudy days, the system is still producing some energy. The 7 large solar hot water heating units have also proven worth the investment. "We've had a consistent flow of hot water since we started operations, which is really good as we are catering for quite a congregation now," Boon says. Gathered in the lunchroom are at least 150 people, and there are several classes going on upstairs. "What's particularly good is that we've also started hosting other religious groups here several times a week," Boon says. "Right now we have a Muslim group, one Hindu group, and a Unitarian service that happens at our temple. The local government has found this all a bit puzzling as religious groups rarely get together like this," he laughs. "We believe in interfaith understanding, and embracing the many different communities that live here in Singapore. It's a small island and this place is about bringing people together."
After we finish lunch, Boon shows me the upper floors of the temple. The main worship hall has been completed, its lotus dome beautifully lit by thousands of energy efficient LED lights. The passive ventilation design of the dome and open walls channels the air through the space, allowing cooling to take place without the need for air conditioning. With a capacity to hold several hundred people, this is no easy task. On the same level as the worship hall, there's a terrace that is now fully planted with a garden. Butterflies are all over the place. "Let me show you something else," Boon says. He reaches down to pull open an access hatch. "We're also storing some of our own water on site. We still haven't gotten full permission for all the rain tanks we had planned to install, but this one was approved. We now can use the rainwater that falls to water the plants in the 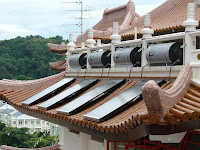 terrace garden." As Singapore gets significant year-round rainfall, this will be a worthwhile investment for the future. We go up one more level in the temple to get a better view of the pagoda structure that lets light in to the lower regions of the temple's interior. During phase two of the construction, the pagoda's overhangs will also be covered in PV panels. "Shhh," Boon says, "don't tell the architect!" In addition to the pagoda, there are Solatubes also dotted around several of the terraces on the back of the temple, allowing natural sunlight to penetrate the lower levels. "It cuts down on the amount of lighting we need, and electricity we would need to run them. They work really well," Boon informs me. Unfortunately, one of the most innovative features of the temple has been held up in red tape. "We were going to trial micro-hydro power generation in our rain gutters, since rain from the roof falls nearly 25m to the base of the structures. We don't have approval yet. Something like this has not yet been done in Singapore, so it makes people a bit nervous. We don't fit in the box," Boon says. Something else falling outside the box is pollution monitors. Boon has been concerned for some time about the oil refineries located on an island just off the coast of Singapore. "The temple is only two years old, and yet we already have signs of air pollution in the area. Our building already bears some of the scars," he points to several stained points around the structure where airborne pollution has been brought down by rainfall. "I've already written three letters about the pollution, and if nothing is done by the government, we're going to install monitors here and have the data live on our website. With asthma and COPD diseases on the rise in Singapore, people need to know what they're breathing and how it affects them," he says. I hadn't anticipated the pollution already leaving a mark, but it's good to see that people are starting to take notice. Like any problem, if it is invisible, it's hard to warrant any concern from people, much less push for any changes to fix it. The temple has come along in leaps and bounds, and the congregation is flourishing. We head down one of the handicapped accessible ramps for a final shot of the temple. While many of the congregation is older and the facilities have been built to suit an aging population, Boon is thrilled to have so many young people in the temple on this particular day. "They will be the future, they will be the ones taking all of this forward," he says. Judging by the progress made by Boon and his counterparts, the younger generation will have some very big shoes to fill.
By Chris Tobias for Reuters
Posted by Shravasti Dhammika at 1:06 AM

Just a few weeks ago I visited this temple and was briefed by a friend on some of the facilities that traps solar energy.

Buddhist Fellowship is located in their premises.

I hope in time to come there would also be green churches, green mosques etc.

Nice to have different religions using that premises for their respective religious activities. Hope in time to come we have churches and mosques doing that. Hope it is not fat hope :p

The only green building is made of mud and attap leaves. Modern buildings are not. In fact modern buildings for churches, temples and even mosques are not green. I see places of worship are getting monstrous - iconic mosques, golden temples, mega-churches. Why is there a need for such huge buildings which are only used once a week?