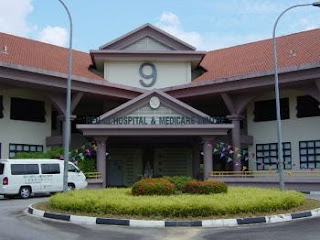 Since the trial of Venerable Ming Yi, the Ren Ci Hospital has reported a dramatic drop in the donations it receives. In a sense this is understandable. Who wants the money they have donated to charity being used for other purposes? However, I would ask Singaporean Buddhists to keep in mind that the amount of money that was diverted from its real purpose was $50,000, a rather small percentage of the money donated. I would also ask people to ask themselves, ‘Did I make my donation because I liked Ven. Ming Yi or because I wanted to help the less-privileged to have a chance of getting good medical treatment?’ If you can answer ‘Because I wanted to help the less-privileged’ them you should continue giving Ren Ci your support. Don’t penalize the many for the failings of some. The dedicated staff at Ren Ci Hospital are doing their jobs now just as well as they were before. They too deserve our appreciation and support.
Posted by Shravasti Dhammika at 1:05 AM

I hope your noble and pure hearted call will not fall on deaf ears. Feel ashamed that I cannot respond to it myself...

The amount of money diverted may be a small percentage of total donations but the damage done was dramatic. Like NKF, it will take some time before confidence and compassion is restored. The less-privileged are the ones who depend on charity and any form of defaulting charitable organisations affect those who needed help most. What is interesting to note is that 'rich' charitable organisations are ripe for the picking and unlike commercial organisations, proper governance, audit and financial stewardship are lacking. Why nobody saw this coming is just as blind as been faithful.

For those that want to assist in this endeavor, this link will take you to the contribution/donation page of the hospital's website.

Unfortunately, the format for online donations might be unfamiliar to some. I have not seen similar forms in the USA. What is a "NRIC number" or a "crossed" check/cheque?

NRIC is the national identity card. A crossed check is a…a…a…I have no idea.

A crossed check is one that can only be deposited into a bank account (as opposed to being exchanged for cash at a bank counter). It is meant to reduce the chances of fraud.

To cross a check, simply draw two parallel lines across the top left corner of your check.

Crossing checks is perhaps not an American practice. This is a British practice (perhaps also European?).

Thanks for all the insight. Indeed, I discovered that a "crossed check" is not a practice here in the USA, although regularly utilized elsewhere. It seems useful; like putting "for deposit only" on the payee endorsement area on the back of the check.

I appreciate my online teachers.

Be well and take care.

Hi Venerable, thank you for making this point. It is something I have commented to my friends as well. We should not conflat Ven Ming Yi and Renci; the mismanagement on the latter was "just" $50,000, which is quite little in the overall scheme of things. I am not sure why the DPP's focused so much on Ven Ming Yi's lifestyle. Indeed it was not appropriate, but actually he did not officially flout any laws of Singapore (perhaps only the vinaya) in keeping an expensive horse or aptmt. In my mind, it is analogous to the Clinton case: despite his personal failings, was Clinton actually a bad president for America? I don't think so. (Alright, if one argues that the president has to be the role model for American children, yadda yadda, then maybe.) Just some thoughts to share.