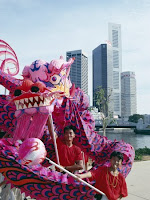 Today is Singapore’s National Day and the country is 44 years old. Many people put out the national flag and the official celebrations will be impressive. I notice that quite a few younger Singaporeans I know seem to find it hard to be interested in, let alone enthusiastic about, National Day. Although I’m not a Singaporean, I feel rather different. Having visited and even lived in almost every country in south and south-east Asia I have a considerable admiration for and appreciation of the Singaporean achievement. The leaders and people have built for themselves a stable, prosperous and decent society – a good place to live and a good place to bring up children (admittedly not a particularly good place to meditate in, but that’s another story). How easily people take their blessings for granted. Anyway, Happy Birthday Singapore.
Someone had pinched the pictures I took in Bhutan several years ago and put them on the internet without either my knowledge or permission. What a nerve! What a cheek! What a….On the other hand, they have presented them very nicely and to the accompaniment to rather beautiful music so I suppose I can forgive them. Have a look at
http://www.youtube.com/watch?v=c0z_vOm-a78
And while your at it you might like to see a series of talks on meditation I gave some time ago. They have five stars besides them which I’m told means that lots of people are watching them. I thought it meant that viewers were ‘seeing stars’.
http://www.youtube.com/watch?v=42Kcvt1SwUY
Posted by Shravasti Dhammika at 1:12 AM

Thank you for the opportunity "to see you in action" - I mean the videos. Impressed! The only problem was that each of the five videos was not complete - some of them seem to have stopped half way through your bhavana talk. There was no problem for me to get the general idea of your approach, but for beginners it could be a problem. A new and very interesting idea is in your talk 5 about swithcing the focus from breath to the solar plexus as soon as the feeling of joy comes... But here again the video stops too early, I feel.
If you are interested I could tell you about a couple of useful tricks at the beginning of bhavana to check unruly mind and to cultivate joy. Maybe for some people they might be helpful.

And a personal query/ which you needn't answer. I setected some inconsistency in the way you pronounce some words? and so I couldn't "place" you as far as your native country is concerned. You sound more like a Britisher than an Australian, but you pronounce initial vowels in such words as "ask" and "answer" differently. :)

Oh yes, Singapore is indeed a great place to live but it does get a tad too "loud & busy" for me.

The stars on Youtube are ratings given by the viewers. 1 star - poor, 2 stars - nothing special, 3 stars - worth watching, 4 stars - pretty cool and 5 stars - awesome! There's also a counter for the number of viewers and that can be found on the right.

The complete talks are found in Google Video:

The "thief" was honourable one, as he made the acknowledgement: "Shakuhachi meditation music by Riley Lee. Images from Bhutan monastery by Ven S. Dhammika. "

I am appreciative of what Singapore has achieved, though there are always those who think that "the neighbour's grass is greener".

A valid observation that younger Singaporeans are not too interested or enthusiastic about National Day and taking their 'blessings' for granted. Lack of hunger, calamities, disasters, deprivations, pollutions, rubbish, robberies, and rampant corruptions have devoid them of any dissatisfactions, sufferings, or challenges. They feel bored and nonchalant about ND. While there are patches of grass greener in some other countries, these youngsters haven’t travelled and seen enough of the world. A small country with a population no larger than some villages, Singapore does not offer the geographical and social diversity compared with many other countries. For every Singaporean thinking of migrating to greener pasture, there are 10 ‘aliens’ thinking of immigrating here.

Special thanks to rebeldealegre for guiding me to complete videos of Dhammika's bhavana talks. But the problem with youtube videos remains and watchers there can be confused.