The Keats-Shelley prize, an annual award for the best poem on a Romantic theme, has for the first time this year gone to an explicitly Buddhist poet, D.H. Maitreyabandhu.
His win shows the enduring appeal of John Keats across cultures, religions and generations, almost 200 years after the poet died, according to Andrew Motion, a former chair of the prize and Keats's biographer. The former poet laureate said that Keats's letters "show what a brilliant and kind-hearted and courageous friend he was, as well as his incredible commitment to poetry, despite poverty and getting it in the neck from reviewers and not being able to marry Fanny. “Then there's the work itself and how it makes an 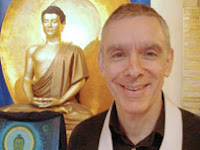 appeal to the recognizable aspects of humanity – not bounded by religion or country or skin color,” said Motion. “The questions the poems address are the absolute fundamental basic ones.” He also pointed to Keats’s refusal to accept Christianity on his death bed, despite attempts by his friend Joseph Severn. “Keats was very steadfast – a very Keatsian word - in not accepting that, and I think that was incredibly brave of him. It’s always one of the things I've admired in him particularly, not just because I don't believe myself, but to hold the line when he had days left – there is something steadfastly humanitarian about him,” said Motion.
Maitreyabandhu, who has been ordained into the Western Buddhist Order for 19 years, says his love of poetry began when a friend read him the first five verses of Shelley’s Mask of Anarchy. “It was one of those moments when one discovers a new ecstasy, even a new calling. After that I read and re-read Shelley and Keats obsessively and used their poetry to explore ancient Buddhist themes,” he said. “W.H. Auden says, ‘The primary function of poetry, as of all the arts, is to make us more aware of ourselves and the world around us’. The same could be said of Buddhism. I approach poetry, in one sense as a distillation of peak experience, in another as finding meaning in the everyday – as such, poetry has become another strand of my spiritual practice.”
This year’s prize asked for poems on the theme of “find”. Maitreyabandhu's, “The Small Boy and the Mouse”, sees a boy look inside himself to see an egg, within which lies a garden where a mouse sits holding a picture of a boy. Chair of judges Professor Janet Todd called it “a wonderful evocation of the nature of childhood” which “questions the power of imagination.”
“And what was strange about the picture, / apart from being held by a mouse who sat on his haunches / and gripped it in his forepaws, was that the space / around the boy, the paleness around him, expanded, / got very bright and engulfed the mouse, the bathtub, the garden, / and the egg with its shell cracked off,” writes Maitreyabandhu. He has written poetry while on retreat over the last 24 years, he said, starting to work on it seriously in 2005. Three of his poems were published that year in an anthology of contemporary Buddhist poetry; he has since had work published in Poetry Review, and is soon to be published in the poetry magazines Smiths Knoll and Other Poetry.
“The purpose of Buddhist practice is gain insight into the nature of reality, for example through meditation,” said the 48-year-old, who lives and works at the London Buddhist Centre in Bethnal Green. “My aspiration is to communicate any glimpses I have had of this through my work.” He said he was delighted to win the £3,000 prize. “I feel I owe so much to both Keats and Shelley,” he said. “I think of them as friends, or rather mentors – poetic and spiritual.”
From the Internet.
Posted by Shravasti Dhammika at 12:22 AM

Thank you for posting this lovely article!
I was so caught up thinking about Ajahn Brahm and the nuns that I didn't see it at first!

May you be happy and well!
Suzanne