Thoughts On The Chinese Occupation III

Around Shigatze there are several monasteries of great importance, the main ones being Nathang, Shalu and Ngor. I had tried to visit them during my first visit to Tibet but this proved impossible. During the 11th century these monasteries were important centers for translating Buddhist texts into Tibetan and when the great Rahul Sankrityayan visited them in the 1930’ he found hundreds of perfectly preserved Indian palm leaf manuscripts in their libraries. It was at Ngor that he found the only known copy of the Subhasitaratanakosa which he was able to acquire so that we can now read and delight in it (See my post of 15th May 2008). He found numerous other unknown Buddhist works, photographed some, copied others out by hand but had to leave most of them in their libraries. After the Chinese invasion these monasteries were trashed and desecrated, their priceless manuscripts torn up and burned and the few that survived were carted off to Peking where they presumably still are, although no one really knows. Now that Shalu and the rest are ‘State Designated Cultural Relics’ it’s possible to visit them and so I took the opportunity to do so. It turned out to be a very depressing experience. Shalu was the seat of Buston Rimpoche, one of the greatest minds Tibet ever produced. The once stately Shalu is now a shambles, trash, garbage and dirt all over the place, its once hallowed halls silent and its library empty. 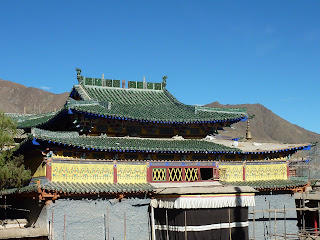 A few years ago a UNESCO-Norwegian group that came to inspect the government’s restorations at Shalu reported that ‘concrete has been used to fill a number of cracks. New paint and varnish is seen in many chapels. In the top-most Vajradhara chapel, a panel with garish new paintings does not match in any way the superb quality of the 15th originals’. In short, the so-called restorations are inept, unprofessional and destructive to the temple’s original character. We saw evidence of this too. The paintings were done in 1304 by Newari or perhaps even Indian artists and are a rare and precious survivor of this genera of painting. Those that survive are breathtaking – Buddhas, bodhisattvas and scenes from the life of the Buddha. 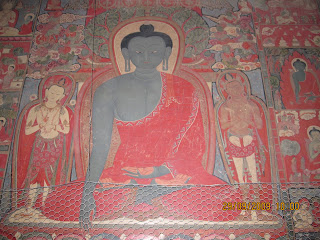 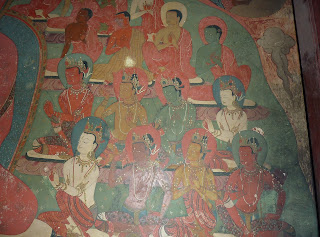 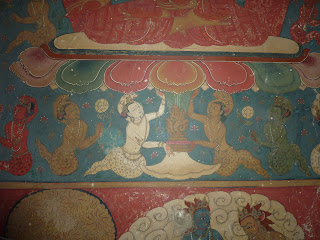 The abbot showed me where Chinese vandals have hacked a long scar down one side of a painted image with the intention of removing a whole section of wall (see picture below). In other places the eyes of all the figures have been hacked out. 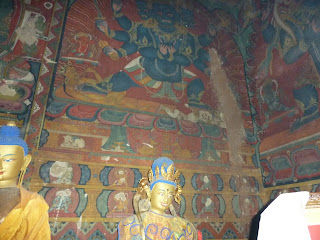 It seems that two principles have guided the Chinese government’s attitude to Tibetan cultural treasures – (1) Destroy the original then build a copy, and (2) Don’t trust the ‘natives’ to look after the treasures they devotedly preserved for 1500 years. Shalu offers a good example of this second principle. The circumambulatory passage around the main shrine is covered with the most exquisite paintings. Pilgrims and devotees have been shuffling through this passage since the seven centuries and there is not a mark, not a scratch, not a dirty fingerprint on the paintings. They are immaculate. And yet the Chinese have now nailed chicken wire to the lower level of these paintings ‘to protect them from damage’.Narthang is in an even worse state than Shalu. All the original buildings erected in 1033 and the famous ‘forest of stupas’ have been raised, piles of rubble being the only witness to what was once there. One of there stupas has been rebuilt in a rather poor copy of its original (an example of the first of the two principles). Only a few 17th or 18th century buildings are left standing. 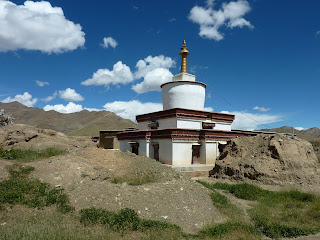 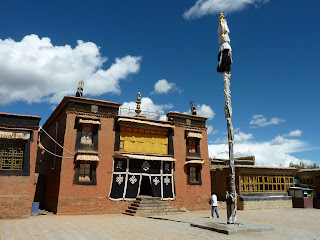 At first we couldn’t find anyone to open the doors but eventually an old monk appeared and I asked him about the library. As I half expected, he said it didn’t exist any longer but he offered to show me the old printing press. The Nathang edition of the Tibetan Tipitaka was one of four such editions and was published in the 15th century. Thousands of printing blocks lined wooden racks around the walls. I was relieved that this precious resource had not been damaged and mentioned this to the old monk. He pointed to some of the lower racks and I realized my optimism was misplaced. There were printing blocks with all the letters planed off, some were split into two, three or four, probably to be used as kindling, others were hacked in half. I found a trowel made of a cut-up printing block and an intricately carved book cover (I would have said about 14th century) split into three, again probably to make kindling. 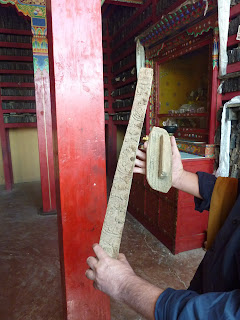 The Red Guards had given most of the printing blocks to the villagers to use as lumber or fire wood and had used the rest for various purposes. The villagers had hidden the blocks until the glorious Communist Party of China ‘corrected’ its policy on nationalities, and then reverently returned them to the monastery. Nathang is now yet another ‘State Designated Cultural Relic’ which doesn’t mean very much after the state that’s now doing all the ‘designating’ destroyed just about all the ‘cultural relics’.
Posted by Shravasti Dhammika at 1:16 AM

The Cultural Revolution as it was called was precisely a revolt against the culture of the day. Thus all works, artefacts and architecture that are not communist-inspired or CPM-sanctioned have to be destroyed. This happened not only to Tibet but also within mainland China. It is one BIG mistake of MAO. The HUGE egoistic and idol-like picture at the entrance of the Forbidden City is nothing but a reminder that the CHIEF Gangster once preside.
The CPM will not admit to its mistake. No self-respecting communists do as in the present leadership. It is not in the doctrine of Marx or Lenin. And like them, Mao will also be consigned one day.