Me And Mt. Everest

Size really does matter. And apparently so does height. If Mt. Everest was 239 m lower it would hardly attract any attention. Fifteen hundred people a year wouldn’t bother forking out huge amounts of money to climb it. Those extra meters of rock have imparted to Everest an almost mystical aura in many people’ minds. It has made it the most revered geological feature on earth. If you can manage to get your name on the waiting list and have the required money for the climbing permit, you immediately qualify to become a ‘motivational speaker’, advise CEO’s how to run their companies, go on talk shows, write a book about your experience and have anything you say taken seriously. After Hillary and Tenzing succeeded in standing on the summit in 1953, a truly heroic achievement, a host of others have tried to get in on the act by being the ‘first’ to do it some other way. So we have had the first woman to climb it, the first person with no legs, the first blind person, the first without oxygen, the first to do it in winter, the oldest person, and the youngest. Apa Sherpa has climbed it more times than any one else, 19 so far. The first who tried climb it naked was prevented from doing so a few years back so that category is still open. Each nation has its first citizen to climb it and who could forget the Goons who were the first to climb it ‘from the inside’. I’m told that the first expedition to climb Everest backwards is squeduled to leave next year and they will be followed by the first dressed in Mickey Mouse suits. Last month I became the first Buddhist monk to walk to the foot of Mt. Everest and after scrutinizing it carefully for about 30 minuets while catching my breath, resolve not to climb it. Here are some of the photos I took after my record-breaking achievement. 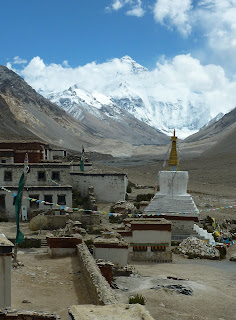 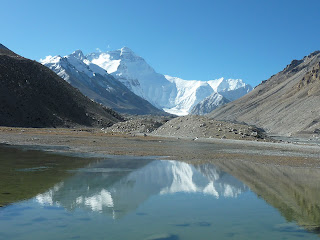 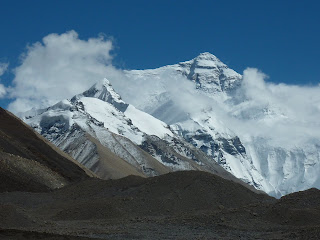 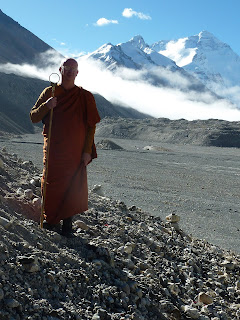 Why Hillary was the first; and not Tenzing?

Had a look at Everest on the highway from Kathmandu to Indian border. It was smaller than the nail on my pinkie. What a lesson on relativity!

My spouse was part of a team that did scale Mt Everest. I do agree that it is not the physical climb or the order of the climb that matters. It is about one's willpower and how one manages the dynamic between the desire for the physical accomplishment, the mental strength to make it, or to let go of the desire to climb!

In a way, your decision to NOT climb it, has some spiritual parallel to someone who decided to climb it :) So congratulations to you too!