It’s true as the sutras, sastras and kavyas say that Manasarovar is the abode of all kinds of strange and wonderful creatures. We saw hawks, marmots, wild asses, antelope, hares and numerous small mice-like animals that darted into their holes when we came near. True, I didn’t see Kesara lions there, but let’s not be too pedantic. But I did see the hamsa and the cakkavakas which are nearly always mentioned as two of the most beautiful natural adornments of the holy lake. Kalidasa, Bana, Asvaghosa, the Divyadana, etc, all mention these birds living around the lake. The Sanskrit and Pali word hansa is often incorrectly translated as ‘swan’ but swans are not native to India and were unknown to the ancient Indians. The hamsa is the Bar-headed Goose (Anser indicus) and the cakkavaka is the Greylag Goose (Anser anser). I saw both these beautiful birds in the channel that links Raksha Tal to Manasarovar. The cakkavaka got its name from the way the male and females (they are always seen in pairs) call to each other, the male gently honking, the female responding, the male replying, and so on; a circle or ‘wheel’ (cakka) of song. This gentle, musical ‘aang aang aang’ is widely acknowledged to be one of the most enchanting call in the natural world. To both see these birds and here them was absolutely captivating. I’ll never forget it. The other bird, the Bar-headed Goose, sometimes raja hamsa in Pali, is the most celebrated bird in the Tipitaka. In Ganden Monastery I saw a painting of the world as imagined in Indian (Buddhist) cosmology and in the depiction of Manasarovar were geese swimming and diving. 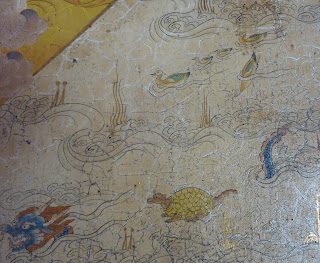 The Buddha said that householders are like the peacock in that they are beautifully colored but a clumsy flier while monks and nuns are like the goose, drably colored but able to soar into the sky (Sn.221). Vangisa addressed the Buddha saying: ‘Quickly send forth your melodious voice, Oh Beautiful One. Like geese stretching out their necks, honk gently with your soft sonorous voice’ (Sn.350). Bar-headed geese are often seen in India during the winter, feeding in swamps and fields until mid-March when they fly off to nest in around Manasarovar and other Tibetan lakes. To the Buddha, this migratory behaviour was suggestive of detachment. He said: ‘Mindful people exert themselves. They are not attached to any home. Like geese that fly from their lakes, they leave one abode after another behind.’ (Dhp.91). ‘Geese fly the path to the sun, sages fly by their psychic powers. Having defeated Mara and his army, the wise are led away from the world’ (Dhp.175). Pingiya used the geese’s arrival back in northern India in October as a metaphor for the coming of something wonderful. ‘Just as a bird might leave a small grove to dwell in a forest full of fruit, so do I, having left narrow-minded teachers, come to He of Wide Vision, like a goose arriving at a great lake.’(Sn.1134). 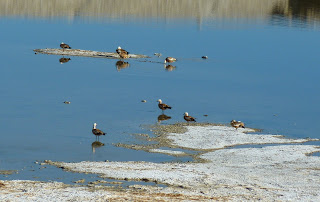 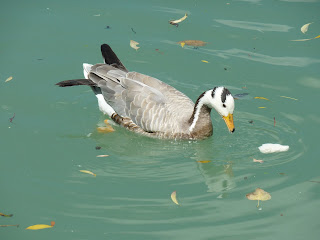 The recent fiasco pertaining to the ordination of Bhikkhunis caught me by surprise. What are your views towards the excommunication of Ajahn Brahm?
http://www.buddhachannel.tv/portail/spip.php?article10060

I know this is totally off topic but I'm disturbed by this matter, especially while I'm still reading Ajahn Chah's A Still Forest Pool.