Thoughts On The Chinese Occupation I

What’s the difference between being occupied by the Nazis and being occupied by the Chinese communists? Mmmm. Let me think. Two significant differences come to mind. After the Nazis took over they made no effort to win the affection of the subjugated peoples. Their attitude was, ‘We’re here, we have the guns and the rubber trundgens and we’ll blow you away if you look sideways. GET USED TO IT!’ When the communists (of whatever sort) took over, they expended enormous effort and recourses on trying to create the illusion that the subjected peoples were joyously happy. Huge billboards proclaimed it, all media outlets broadcast it and pictures of smiling workers were everywhere. The weird thing is that the Party knew it was a lie, the Party knew that the people knew it was a lie, the people knew that the Party knew they knew it was a lie, everyone in the so-called Free World knew it was a lie, and yet they kept up the charade right up to the day before communism consigned itself to the dustbin of history.
Visiting Lhasa must be one of the few places in the world where you can still see this type weird, cloud-cuckoo illusion, North Korea is probably the other. There are heavily armed Chinese soldiers and policemen on every main intersection; their surgical masks (against H1N1 flue) and white gloves making them look even more sinister. We had to pass through at least 30 military and police checkpoints during our trip – four between the airport and the city – and they don’t just

peruse your documents, they check the thoroughly, sometimes ringing the previous checkpoint to confirm the time you passed through. While walking on a Lhasa street I passed a group of SWAT team-like guys – black balaclavas, black body armor, black AK47’s. I’m not joking when I say I tried not to make any sudden movements or eye contact. A platoon of soldiers, guns at the ready, paraded around the square in front of the Jokang all day. There were also soldiers with binoculars on the rooftops constantly monitoring the crowds in the plaza. I saw one Chinese policeman approach a group of Tibetan men casually chatting, check their ID’s and order them to move on. How many plain-clothed secret policemen there were mingling with the crowds is anyone’s guess, but I suspect there were lots of them 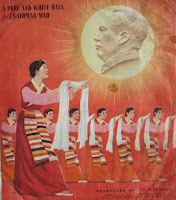 . At one military checkpoint the vehicle in front of us was being thoroughly searched, apparently at random. As we entered and left Tibet customs officers again went through everyone bags and seemed particularly concerned about printed matter. Someone told me they are after Lonely Planet’s Tibet – a subversive publication if ever there was one. For all this suspicion and caution, checking and control, intimidation and paranoia, the Chinese spend nearly as much time and effort insisting that the Tibetans are just so damn happy they can hardly contain their joy. I saw a huge billboard showing a beaming Tibetan lady in traditional dress appreciatively pouring chang for a group of PLA soldiers. There were signs up everywhere (in Chinese and Tibetan) trying to whip up enthusiasm for the 60th anniversary of the communist takeover. None of it fools anyone, especially not the Tibetans. At least the Nazis never bothered to pretend, probably the only honesty thing they ever did.
Posted by Shravasti Dhammika at 12:05 AM

Rightly Said.
But Frightfully Scary.
When will this End?
We can take Solace over the Quote "All Things are Impermenant"
One day Tibet will regain its Glory & Happiness , but even that is Impermenanent!

I can see the Preview but when i click it , it does not lead to ur page.

It says "page not found Dhamma Musings does not exist"

I agree to everthing in your article. I have been in Tibet some years ago and it is sad to read that thing did not turn to the better, it seems they turned even worst.

By the way: The Propaganda of German Nazis worked in the same way like the chinese propaganda, they also pretended that everything is allright and for the best, at least in Germany.

One big difference was, that the jews, the politic opposition of any kind, the freemasons, the jehovas witness, the homosexuals etc. where blamed as the root of all evil and they have been used as the scapegoats and punching bags for the whole nation.

Very sad indeed. I was in Tibet in August this year. I had taken hindi cds and dvds to give our guide and sherpas which was confiscated by immigration officials. We were made to drink our water which we bought in nepal i suppose to check if the water is water not explosives. all our luggage was emptied and checked.

The charade of lies is everywhere including 'democratic' countries, educational and religious institutions. Self-interest, protection, denial of wrong-doing, desire to control, illegitimacy, the need to present good front, to gain acceptance - all lead to falsehood, lies, damn lies and PRopaganda (PR_organised lies).