That Was Then This Is Now

I notice quite a few wed sites making the claim that Tibetans are better off under the Chinese than they were before – the standard claim imperialists and colonialists have always made. These wed sites all include photos of the gruesome punishments that were handed out in the good old days and of dirty, ragged serfs. So far so good. Traditional Tibetan justice could be barbaric and all visitors to the old Tibet commented on how filthy the place was. The Japanese Buddhist monk Ikai Kawaguchi dubbed Lhasa ‘the citadel of filth’ and by all accounts it was pretty dirty. But have things improved afte 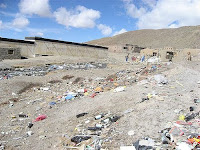 r 60 years of Chinese occupation? Well, I found Lhasa to be relatively clean and neat and one could not help notice the extensive reforestation, at least in the areas I visited. But beyond Lhasa every town was squalid and filthy beyond description. The level of hygiene in hotels and restaurants was uniformly rock bottom. The main street or streets of all towns was filled with piles of stinking garbage, puddles of reeking sewerage, rotting animal parts, mud, dust or both. The bathrooms/toilets of one new Chinese hotel we went to were all padlocked and several others we stayed in, again all new, had no bathrooms or toilets or running water at all. One was told to go around the back and do it in an open space stinking to high heaven and covered with the shit of earlier guests while pigs and dogs waited in anticipation. Now I’m well accustomed to the squalor of Bihar and UP in India and it doesn’t worry me – but Tibet was something else. Nowhere except Lhasa did I see evidence of a sewerage system, of garbage collection or of the delivery of safe, clean drinking water. And as for the people, many had that unkempt, grubby look that usually goes with poverty and w 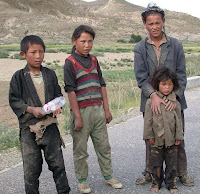 ant – although they were all cheerful and good humored. Then has the system of justice become more civilized? Not according to every single human rights organization. Under the lamas it was iron chains, whips and the stocks. Now its rubber truncheons, electric cattle prods, drills, surgical pliers and stun guns. In the good old days if a serf didn’t like his lot he could leave, although there was no refugee community in India or Nepal. Now Tibetans can only approach the borders of their country with a special permit and they’ll be shot if they try to cross them.
Recently there were reports of such a shooting which the Chinese indignantly denied. But a mountain climbing team happened to witness and film the whole incident and later posted it on the internet, http://www.youtube.com/watch?v=BkMcj4vQtRU Don’t be fooled by the smiles and the business suits of the Chinese officials. They’re as brutal as they ever were and they still couldn’t tell the truth to save their lives. Some 20 survivors of the shooting remain missing. If they are still alive they’re probably receiving ‘patriotic re-education’ in some grim prison. http://en.wikipedia.org/wiki/Nangpa%20La%20shootings So are the Tibetans really better off under Chinese rule? Nothing I saw gave me that impression.
Posted by Shravasti Dhammika at 1:15 AM

I posted the video on my Face Book page along with your quote about "Don't trust the smiling faces...." I hope that's okay.

Dear Bob,
The more people who read it the better. I’d appreciate it if you included my bob log address too.