The Brickfields Temple in Kuala Lumpur, Malaysia, has just published the first book on Buddhism in in Luganda, the language spoken by about 10 million people mainly in southern Uganda. The book is a translation of How to Practise Buddhism? by the late Ven K Sri Dhammananda. The book was translated by Nicholas K. Sewanyana and Tom Kyembe and edited by Bhant 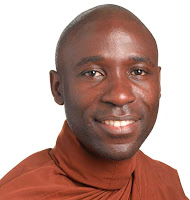 e U. Buddharakkhita, currently the only African Theravadian monk. Bhante Buddharakkhita has also authored another popular book, Planting the Seeds of Dhamma - the Emergence of Buddhism in Africa, telling of his journey towards the Dhamma and his experience as a monk in country where Buddhism is almost completely unknown. He has also set up the Uganda Buddhist Center in Kampala, the first Buddhist center in Africa set up by a native African monk. Bhante’s mother has been ordained to become the first African Theravadian Buddhist nun. The Uganda centre and it’s Buddhist population is growing slowly with the support of Buddhists overseas and the small expatriate Chinese, Thai, Burmese and Sri Lankan communities. At present there are also Buddhist temples and associations in Kenya, Tanzania, Botswana South Africa and Cameroon. For more on Bhante Buddharakkhita and Buddhist in Uganda in Africa go to http://www.ugandabuddhistcentre.org/
Posted by Shravasti Dhammika at 12:02 AM

How strange! I just got back from a day-lomg retreat with Bhante Buddharakkhita at NYIMC in Manhattan. He's great bhikkhu, very knowledgeable and completely personable. I can't speak highly enough of him.