There are few references to Tibetans going to southern India in ancient times, Man-Iuns-po’s journey to Kerela in the early 13th century being one of the few examples. However, no records exist of them going the short distance beyond the mainland needed to get to Sri Lanka. The first Tibetan we know to have visited Sri Lanka was Mahinda, the monk whose statue looks out across Maradana Road. Born in Sikkim Mahinda was not technically a Tibetan but a British Protected Person by nationality and a Lepcha by cultural background, the Lepchas being one of the groups that make up the Tibetan people. He was born Tashi Namgyal into a noble family in Gantok at the turn of the twentieth century. One of his brothers became prime minister of Sikkim and another became professor of the Tibetan language at Calcutta University. A third brother later joined Mahinda in Sri Lanka and became a monk under the name Punnaji.
When the First World War broke out, the German monk Nyanatiloka, who had been li 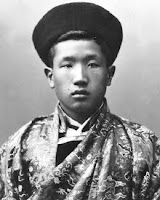 ving in Sri Lanka, was interned in Australia as an enemy national. On his release he was refused permission to return to Sri Lanka, and so he decided to go to Tibet. When he arrived in Sikkim he discovered to his great disappointment that Tibet’s borders were closed to all foreigners, even to a lone Buddhist monk seeking refuge. However, Nyanatiloka did make contact with and received some help from the Sikkimese royal family. Some modernists in the government were unhappy with the state of Sikkim’s Sangha, and their talks with Nyanatiloka convinced them that sending young monks to Sri Lanka might help to bring about the reforms they wanted to see. Consequently, the young Mahinda went to Sri Lanka and stayed at Nyanatiloka’s Island Hermitage at Dodonduwa. Later he studied at both Mahabodhi College and Vidyodaya Pirivena. In 1930 Mahinda took his lower ordination under the great Venerable Lunupokune Dharmananda and in 1931 his higher ordination. He quickly mastered the Sinhalese language and later used his considerable facility in it to write a large amount of fine poetry. He is mainly remembere 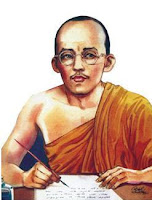 d today for the religious poems and verses that he wrote for children, a genre virtually unknown before him. He also wrote rousing patriotic poetry urging Sri Lankans to be proud of their own culture and religion and to struggle for independence from Britain. Recently some erotic love poetry has come to light as well. Mahinda’s other literary works include a translation from Pali into Sinhalese of the classical poem Sadhammopayana and a biography of King Prakamabahu. He died in 1951 at the age of 50, but his children’s poems continue to be widely read and appreciated. Recently the Chinese government sent a scholar to Sri Lanka to research into Mahinda’s life and writings with the purpose of highlighting the supposed ‘Chinese’ contribution to Sinhalese literature. When it was discovered that Mahinda was born in Sikkim, not Tibet, the scheme was quietly dropped.
Now that Buddhism is established in the West and many large cities there have both Tibetan and Sri Lankan temples or centres, the opportunity for the interchange of ideas between the two have never been better. However, this does not seem to have happened yet. When Tibetan and Sri Lankan monks join each other at inter-religious meetings or at celebrations, they always smile at each other and exchange pleasantries, but the contact goes little deeper than that. Most Sri Lankans still regard Tantra as a ‘later distortion’ while the Tibetans look upon the Theravadins as weaker cousins who they hope will have the opportunity to practice the higher path in the next life. The truth is that neither group know very much about the teachings of the other. Mahayana has been studied with appreciation in Sri Lanka for years but Tantra remains virtually unknown. Tibetans study the text of long extinct ‘Hinayana’ schools and assume that they know all that is worth knowing about living Theravada. Hopefully the time will soon come when the openness, respect and mutual sharing that existed in the past between the Buddhists of Tibet and Sri Lanka will return once again.
Posted by Shravasti Dhammika at 12:52 AM

A very nice trio of articles. Tibetan and Theravada Buddhism are both very popular in the West currently, and I think the dialoge between the two it very valuable. It certainly is for me on a personal level as I started out in Buddhism with a Sri Dhammandanda book, very orthodox Theravada, and then got into Tibetan Gelug Buddhism for a few years, then back into Theravada and now somewhere nowhere. Buddhayana maybe?