In a reply to my post of September 10th Celestial Horizon asked whether watching films or videos or playing games which include violence or killing would be wrong from a Buddhist perspective. It’s a good question. The Buddha says that one thinks (or intends) and then acts, but this is clearly not always the case. Sometimes I feel like killing my neighbor’s continually barking dog, but I never have and never will. My understanding is that research so far has not found a link between watching violent movies and developing a proclivity to violence. However, I suspect that a large amount of such ‘entertainment’ might harden one to violence and thus inhibit compassion or at least make one less shocked by violence, and thus make one more tolerant of it, at least in some people. Others could argue that such ‘entertainment’ allows people to vent their violent impulses in a harmless way. So until further research comes in perhaps we could say that while films and games with violent content may not be ‘wrong’ they are hardly ‘skillful’.
After writing this post I put ‘Violent Video Games’ into my image search and this was the first picture that came 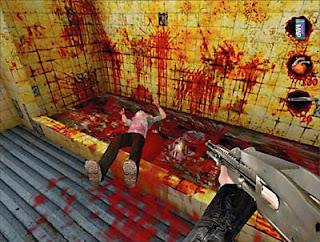 up. Many of the others were even more graphic. I have never seen this type of material before and while I have heard of these types of games I had no idea they were so violent, graphic and gruesome. One can only wonder how people could find this sort of stuff entertaining! But it also raises a few questions. Here’s one. If violent films and games don’t encourage aggressive behavior then surely the depiction of ethnic minorities as stupid, dirty, cruel, etc must not encourage discrimination against such minorities? If violent films and games have no negative effect then surely cultural activities like art exhibitions, opera, recitals, poetry readings, etc, must have no positive effect either; in which case why should governments feel it worthwhile to promote such things? I’m just a simple monk but I think there needs to be more research into these matters.
Posted by Shravasti Dhammika at 12:32 AM

I used to play video games including those with violence, but I never felt like killing anyone, even my neighbour learning to play drums right behind the wall dividing our flats :). And I stopped playing video games when I started meditating regularly. Not because the Buddha would have objected to such pastime but it happened quite naturally. Somehow one gets more mindful about what he/she is doing. So I feel that for a practising buddhist such games and many other ways of entertaining and amusing ourselves are time-wasters. As to their role in society, I think psychologists should be the arbiters. If they suggest that such games are to be banned I will support them. (comment No 1 :)

By logical extension, wouldn't that also mean that there would be no need for Buddha statues or images, no need for nagas on temple roofs, no need to tangkas, etc, because they provide no benefit, are neutral?

I started meditating seven years ago and before I didn't like anything which was in any way cruel because I was easily affected by it. This changed if course and so my emotional baseline is higher, with less peaks and smother.

Today actually I like movies like 'Resident Evil', 'Kill Bill' or 'The Matrix'. But as much as I like these movies, when I am watching the news and I see people who suffer, I still feel feelings like sadness coming up. I think there is no justification for war at all or death-penalty and when I see Ben Kingsley in Gandhi I feel my eyes filling with tears when I realize that such a great person like Gandhi did really exist - in short I am more compassionate than ever.

And here is the psychologist in me ;) :

There is no the slightest clue that there is a causal connection between playing violent games or seeing such movies and acting violent. There is not even a correlation!

So why do people become evil or act like that? Are they born evil, are there certain incidents in their live that make them evil? A question I asked my self quite often and still do, surely because I live in Germany.
Of course there are some personality factors, but what is most important is the situation. The most moral person can slaughter his neighbors - dependent on the situation. In 1994 Rwanda people who shared bed and table, close friends and lovers where killed by their friends, because they were Tutsis and the other Hutu.

Do 'cultural activities like art exhibitions, opera, recitals, poetry readings, etc' prevent that? History tells is that this is not the case. Going even more back in the 1930s in Germany, people were educated according to humanist values and a few yeras later the commanders in the concentration camps were still listening to classical music and reading classical poetry.

Calling people animals or worse instantly affects our behavior, studies show that we are more likely to harm them. Simply because we feel more empathy with beings which are like us and less with the others - that is why we are able to eat cows, pigs, chicken and why the enemy is always barbaric and bestial, otherwise you cannot kill him.

If anyone is interested in this topic I can highly recommend the book 'The Lucifer effect' by Zimbardo.

We have long been interested in finding/developing Buddhist role-play games, where one develops wholesome qualities, acquires useful powers, and can see something of how kamma works to create opportunities or obstacles. If anyone knows of such a game, we'd be glad to know of it! If somebody is interested (and has game making skills), we'd love to collaborate.

Violent video games and movies make not make people violent, but it may have a desensitizing effect on how people view and accept violence as a solution to complex problems. I think.

Richard Harrod asks an interesting question. Statues, temple decorations - I don't think the Buddha recommended them. But he says to Ananda that life in Dhamma is fully connected with beauty. At the same time in some of his discourses he says that music and poetry are among lowly occupations like astrology and other divination methods. And that Truth seekers should not engage in them. While the Buddha often finished his sermons with verses (Udana). And Buddhist poetry has long history and traditions which started with his first followers. It's a bit confusing to me.

More likely it is the excessive grasping of art forms that produced warped characters that will result in sick behaviours. I think from the point of view of meditation, attachment to the arts will pose the same obstacles as any other form of attachments.

"I am just a simple monk"

bKen & Visakha, I'm interested in such games too. I imagine it like an ineractive story telling with learning constructive skills. Most game-makers concentrate on killing monsters/enemies as the basic reward system. Playing violent games will not neccessarily affect everyone but i think, but i can imagine how kids with impressionable minds may be desensitized to violence in the real world. Another concern may be addiction to the violence in games. Kids, teens and adults too are susceptable to addiction i think and thinking too much about violence, even animated (now 3d games esp. first person role playing boast immersive realism) may have some effect on the psyche. "Intention, I tell you, is kamma. Intending, one does kamma by way of body, speech, & intellect."

Dear Bhante Dhammika, thank you for the reply on the question subject. You've pointed out the distinction between "wrong" and "unskillful" qualities.

I am somebody who used to watch copious amounts of horror films, movies containing graphic violence and was an avid player of violent games. Maybe it is due to my stable upbringing that I was not negatively effected by such media and could appreciate the difference between entertainment and reality. Yet I can certainly appreciate how somebody perhaps less mentally stable might be conditioned adversely when exposed to such things. Nowadays it's strange because I have no desire whatsoever to indulge in those kind of fantasy worlds. For me this was a natural offshoot of my daily meditation practice, where the exposure to violence became unnecessary and now even seems to me to be a rather obscure means to entertain oneself.